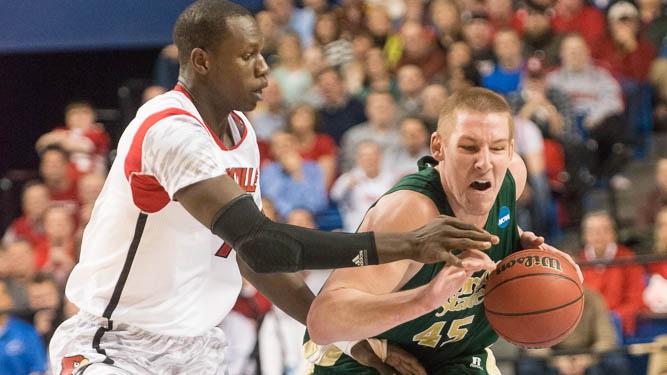 What had the makings of an upset early on quickly got out of hand, as number eight seed Colorado State fell 82-56 to the tournament’s number one overall seed Louisville on Saturday night.

The Rams started out the game on an 8-3 run, highlighted by two Dorian Green three pointers that silenced a largely pro-Cardinals crowd in Lexington, Ky.

But then Louisville junior guard Russ Smith took over.

Smith caught fire in the game, hitting seven of the 15 shots he took in the game and scored a game-high 27 points.

But despite a career day on a national stage, Smith seemed uninterested in his own accomplishments, he mainly focused on the end result on Saturday.

“I’ve learned since being at the University of Louisville nothing matters but winning,” Smith said. “So winning has been the only thing that’s been driving me to play well.”

The Rams have struggled to contain opponent’s top scorers this year, and that trend continued at the worst possible time for CSU.

The Cardinals were able to exploit match-up problems the Rams had with Smith by getting more possessions for the junior guard.

Louisville’s pressure-packed defense, a point of emphasis for the team, caused CSU to commit 20 turnovers, a season high, and they capitalized on most opportunities it received.

“They’re not superheroes or anything,” CSU senior guard Wes Eikmeier said. “It’s just their style of play is just different, no one really plays like that in college basketball and they’re really good at that style. So it was just unfortunate that we let it speed us up and get to us.”

When Louisville got to the Rams, they tended to make them pay for their mistakes.

The Cardinals scored 24 points off CSU’s 20 turnovers as Louisville’s offense, led by Smith and senior guard Peyton Siva, ran rampant on the Ram’s defense which simply couldn’t keep up.

“You can’t simulate how they come at you and I knew it,” CSU coach Larry Eustachy said. “I thought if we could do certain things, we could hang with them, I really did. … (but) Our guys have no quit in them, none of us do, we kept trying.”

And as Louisville excelled at what they do best, the Rams struggled in the areas of the game they usually dominate.

In addition to the season-high in turnovers, CSU, the fourth-best rebounding team in the nation coming into the game, were out-rebounded 29-24 by a more athletic Cardinals bunch.

Louisville did it by not playing into the Rams’ game-plan from the get-go.

“The reason they are a great rebounding team is they constantly create a lot of motion, then they eat you off the bounce, they force you to help and then you’ve got guards trying to rebound against bigs,” Louisville coach Rick Pitino said.

“We did a great job tonight of getting them to the baseline and containing them and what we call closing down the window. It took their offensive rebounding out of play.”

The victory for Louisville places them in the sweet sixteen of the NCAA tournament.

The Cardinals will face the winner of the Oregon-Saint Louis game in Indianapolis next Friday.

The loss for the Rams ends their season after the team won its first NCAA tournament game in 24 years after a victory Thursday against Missouri.

After the game, the emotions were spilling over in the Rams’ locker room.

“I just started talking and I started bawling,” Eustachy said. “. … I mean, they’re just such good guys and they showed up every day and their character. We might have got outmatched with some physical things and everything today, but nobody has out-charactered us.”

The feeling was mutual from Eustachy’s players after the game as well.

“It’s a great group of guys who probably had the greatest season in school history, which is something to be proud of,” Eikmeier said. “But on the other hand, we didn’t show our best game out there and to end it like that is really disappointing and I don’t think anybody is gonna take it harder than the five seniors that are out there, and coach, which is just unfortunate.”