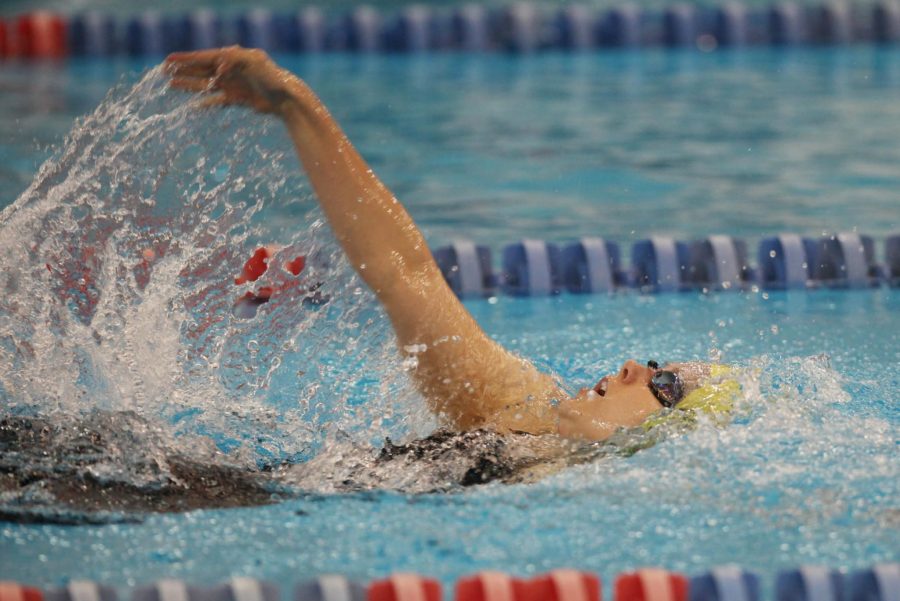 Student-Athlete superstar Breann Fuller took to the starting block for the Rams for the last time Friday.

After qualifying in the Mountain West Championships, Fuller had the chance to compete in the NCAA Division-I Championships in Indianapolis. She swam in the 100 and 200 Backstroke Events.

It was Fuller’s second opportunity to race at the national level. She qualified for the same events in 2009, placing 48th in both the 100 and 200 backstroke. This time around, she came into the championship a much more experienced and decorated swimmer.

“I wanted to put my best effort forward going into my last swims,” said Fuller. “It was a lot of fun to compete at the national level, and it was a great challenge.”

This year, her times in the preliminaries left her eight spots out of the finals, but improved her national rankings entering the championships.

She was ranked 31st in the 200 and 37th in the 100, both of which she easily surpassed with her preliminary times. She was less than a second off the pace of those that qualified for the finals.

“A lot of girls go to the national level and aren’t able to put their best swim forward,” CSU coach Chris Woodard said. “That wasn’t the case with Breann. She came out and had some great swims and was able to do climb up the ladder in the rankings, and I was really proud of her.”

Fuller’s finish at the NCAA Championships was the best individual performance for a Rams swimmer since 2004.

Coaches and teammates alike will miss Fuller’s presence in the pool, in the locker room, and in the classroom.

Senior Lydia Templin has been teammates with Breann for four years.

“She’s such an encouragement to me,” Templin said. “She’s just got something about her. She strives to work harder and she is a positive light on the team.”

For Fuller, the memories of her time at CSU transcend her individual performance.

“I am going to miss my teammates the most. I will miss the laughs that we had in between sets, and being able to have 20 friends to come to every day in practice,” she said.

The team mentality that Fuller has is just one of the many reasons she has had such a successful career as a Ram.

“She wants everyone to become better and she is always there for everyone,” said Templin. “She works so hard and she is a great leader, and she has been a great person for me to look up to these past four years.”

She leaves behind a legacy that will not be soon forgotten. Fuller has been a model student-athlete while at CSU, excelling not only in the pool, but in the classroom as well.

“Breann has made a huge impact in my life, both in and out of the pool,” said Templin.

In addition to being named to the All-Mountain West Team times in her career, Fuller was a three time Mountain West All-Academic team member. This year, she received the Senior Recognition Award, which goes to the most outstanding student-athlete in the conference.

She will be wrapping up her Masters Degree in Business Administration this spring with a 4.0 GPA, and has cemented her name in the CSU record books with five school records.

Swimming Beat Reporter Tyrus Coder can be reached at sports@collegian.com