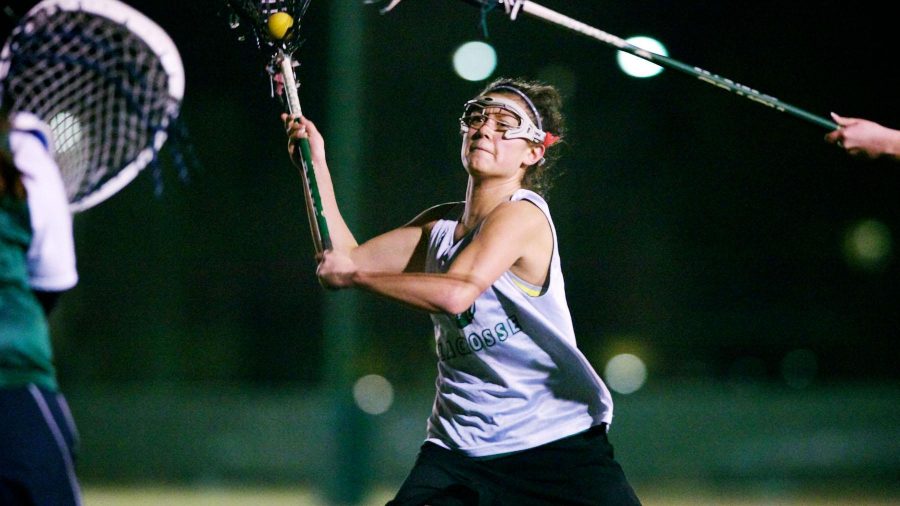 Senior Capitan of the Women's Lacrosse team, Maddie Garcia, shoots for the goal Tuesday night during practice on the football practice field. The team is playing in a tournament this weekend in Colorado Springs.

The CSU Women’s Lacrosse Program has had a taste of success and is hungry for more. After bringing home their second and third WCLA Championships in 2010 and 2011, the Rams fell just short in last year’s championship, falling to UC-Davis 9-7.

The Rams are off to a scorching start in 2013, rolling to a 7-0 record and the number one ranking in the WCLA.

This season, the Rams have picked up right where they left off last year.

“Our very first game we came out with a huge passion and fire and that really brought the spirits up for our team and it has been nonstop this season,” said Coach Lindsey Hudek.

At the beginning of this month, they got a taste of top-notch competition in the Texas Lonestar Showdown, where they came away with two victories against a 7th ranked Texas team and a 4-0 record in the tournament.

“We are number one right now, but it doesn’t mean too much to us because we have some hard games coming up,” said senior captain Caroline Coulson.

Even with their great start, they only have one thing one their mind: bringing the title back to Fort Collins.

“We definitely want to win after losing in the national championship,” said captain Maddie Garcia.

Garcia, along with midfielder Hayley Bernstein and defender Sarah Langlie, were named All-Americans last year and are returning for their final season with the Rams.

“There is a really tight bond this year, and it helps having so many returners on the team,” said Coach Hudek.

“We have a very cohesive unit,” said Garcia. “Even when a new person jumps in, there’s no problem working with them.”

With a good mix of veterans and fresh faces and a surplus of talent that gives them plenty of options on the field, the Rams are poised for another title run.

This Thursday, the Rams kick off their Rocky Mountain league play in Greeley against Northern Colorado.

“We are going to use this game to improve and to work on the things that we have been trying to implement in practice,” said Coulson.

While the Rams said they should outmatch a lesser UNC team, the team is focused on the task at hand.

“Any time we are playing a team in our league, we want to make sure we go in there and win,” said Garcia.

Coach Hudek expects the game to be business as usual.

“For us, there is no point in going to Greely if we don’t get the win,” she said.