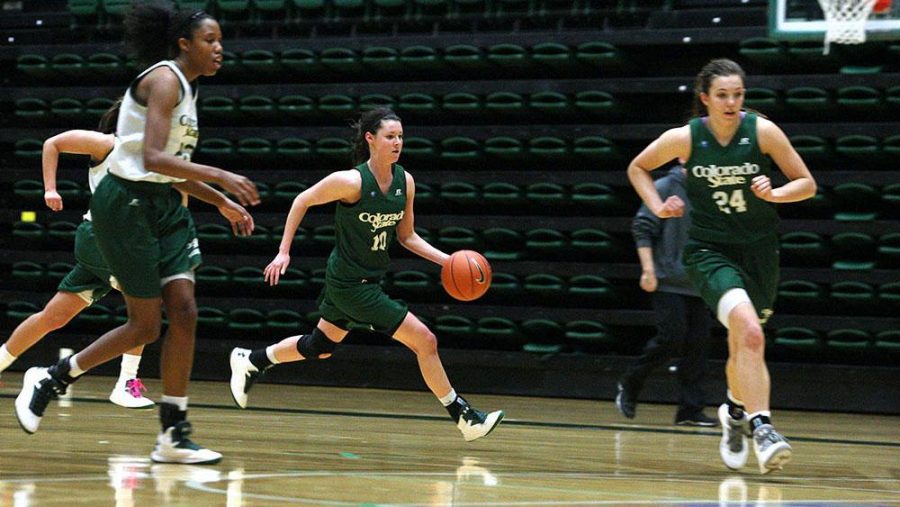 Freshman Emily Johnson runs towards the net to set up for a shot at practice on last week in Moby. Tonight the Rams play Wyoming in Moby at 6 p.m.

She and her teammates take on Wyoming for part two of the Border War at 6pm in Moby Arena.

The 22-6 Cowgirls are coming off of three straight wins and are averaging a conference-leading 71.2 points per game.

“They are going to bring some really good players to the floor,” CSU coach Ryun Williams said. “They shoot it really well from a lot of spots. Their versatility is hard to match up with.”

In February, when part one of the rivalry took place, the Rams outplayed the Cowgirls in the first half, leading by as many as nine. But the Cowgirls made a surging comeback in the second half and won 82-67.

Since then, Williams has worked on getting his team to play a full 40 minutes, toughing it out from start to finish. Williams’ influence on the team has been visible in their obvious improvement from the season’s start.

Looking back on his first season as a head coach, there are more roses than thorns, but he’s still driving towards improvement.

“Obviously we want to win more than we have,” Williams said. “But as far as changing a culture to a philosophy of performance and toughness, we have established what we expect out of a player. Now they just need to take it to the next level.”

The team is especially set on getting a win in their last home game for Heimstra.

They will have to produce a lot of points on offense while also playing hard defense to shut down a tough Cowgirl lineup with four shooters averaging double-digit points.

“I’m going to try and do what I can,” said Martin. “Take open shots when I have them, play defense for the team and get this win for Meghan on her last game at home court.”

For her part, Heimstra is fresh off of a stellar performance in Saturday’s game against Boise state where she scored a career-high 25 points to go along with nine boards, three assists and three blocks.

Heimstra is aware that she has reached her peak at the right moment, heading into the final games before the Mountain West championships.

“It’s better than doing it at the beginning of the season and burning out,” said Heimstra. “I think we are all playing a lot better; we know what we need to do and are focused up.”

Though Heimstra is the only senior being honored on Wednesday, she is heading into it as she would any other game, albeit with some special supporters on the side.

“I have a lot of fans coming. Family, friends, people I work with coming to see me,” said Heimstra. “It will be fun to have everybody there supporting me; otherwise I’m just going to treat it like another game.”

Williams is grateful to Heimstra for the extra edge she brings to the team, and he, along with the rest of the girls, look forward to seeing her exit on top.

“Meghan is a very physical presence, she is a big-time Division 1 athlete,” said Williams. “She has been a rockstar lately, so we need her to finish like one going into the Mountain West tournament.”