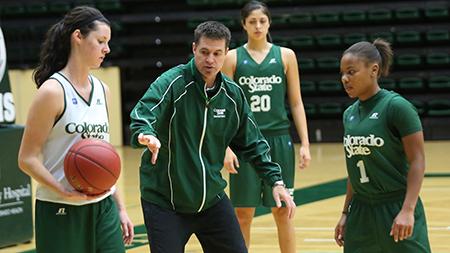 Head Coach Ryun Williams explains a new play to Emily Johnson,10, and LaDeyah Forte,1, during practice. The Rams face Loyola Marymont in Los Angeles this evening and are in search of thier first road win of the year.

The CSU women’s basketball team showcased its ability to adjust and grow in a difficult season.

Most noteworthy was their marked improvement from the season’s start to its end in the Mountain West Tournament.

“That’s all we can ask from this bunch, that they keep progressing and grinding,” CSU coach Ryun Williams said. “We had some tough stretches, but I’m happy that this group has hung together.”

The Rams have improved both offensively and defensively, and though they were unable to come away with a win in their final game against Wyoming in the Mountain West tournament, it was the season’s best performance.

“We had a lot of people scoring and everyone was hitting shots,” junior Sam Martin said. “We were getting the ball where we wanted it to go. Felt like a real team out there.”

CSU’s 51.7 percent shooting from the field in the first half gave the team a 14 point lead. Martin, along with senior Meghan Heimstra and sophomore LeDeyah Forte helped the offense, racking up 14, 10 and 12 points, respectively.

However, the Cowgirls took advantage of an 11 minute scoring drought from the Rams and went on a 17-0 run to tie the game before taking the lead on a Kaitlyn Mileto 3-pointer.

“That’s maybe been our Achilles’ heel all year, just consistent scoring,” Williams said. “We seem to have those droughts often.”

Still, the Rams held Wyoming to just 60 points, in a season where they averaged 71.2 per game. In the first half, the Cowgirls shot just 30 percent from the field.

“We are really good defensively,” Heimstra said. “The coaches always get something really good on the board, and we execute pretty well. It’s just more on the offensive end.”

A solid defense is what Williams, who had 19 years of coaching experience before taking the reigns of CSU, is praised for. Based on the Rams’ increasing defensive ability, Williams has something to be proud of.

“If you would have seen us play earlier, I think you would really know the growth of this basketball team,” he said.

Williams inherited a team that had won just 13 games in its previous two seasons, and has already shown his influence, nearly leading them to a tournament win against the conference’s No 2 seed.

“It’s hard to go out on a loss like that, we all believed we could do it,” Martin said.   “But knowing we gave it everything we had makes it a little easier.”

Though the season was somewhat of a roller coaster, the team will return all of its starters except Heimstra, a piece the team will miss.

“I thought Meghan really helped us grow as a basketball team,” Williams said. “She went out like a senior should go out: performing well.  It’s not easy to be a senior.   She made the most of every possession she played the last month and a half.  She can walk out of this arena really proud and we’re really proud of her.”