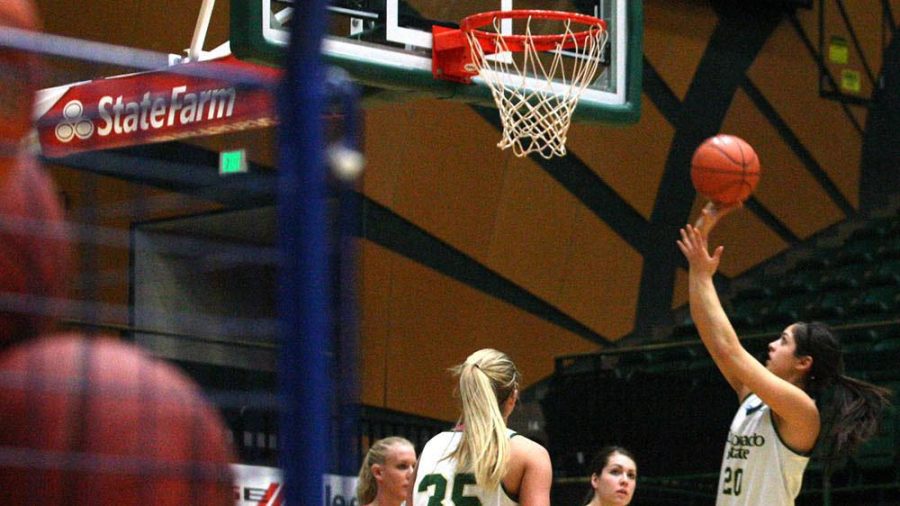 Sophomore Kara Spotton makes a shot at practice in Moby. Tomorrow the Rams will play Nevada in Reno at 5 p.m. to fight to overcome their 6-9 conference record.

Road games are always a challenge, especially coming off a loss, but the CSU women’s basketball team will determine their Mountain West tournament Saturday at Nevada.

The Rams play their final regular season game at 5 p.m. in the Lawlor Events Center.

During Wednesday’s game against Wyoming, CSU remained scoreless until nine minutes into the game and trailed the Cowgirls by 12 points.

CSU has struggled to compete in the early portions of games, and finds themselves fighting in the second half to catch up.

“I just think it was an off night,” senior Meghan Heimstra said. “We just need to work on the offensive end.”

The Rams not only need a repeat performance by Heimstra, but also needs support from junior Hayley Thompson and Freshman Caitlin Duffy, who did not make a basket during Wednesday’s game.

“I think we kind of have to look at what we did last night, how we played against Boise — and past games like that — that we played really well,” junior Sam Martin said. “Its important to look at things we can get better at, and I think that, going into Reno, we really need to play our best.”

Nevada is led by Danika Shark and Chanelle Brennan with 13.4 and 13.3 points per game, and are looking for their third conference win.

Still not a match up to take lightly, the Wolfpack pulls down 40.6 (2nd MW) rebounds per game compared to CSU’s 34.8 (Last MW) and a Mountain West third place 9.8 steals per game.

CSU has lost three out of their last four games, but played well in losses to top teams Fresno State and Wyoming.

“I think yesterday was pretty motivating for our entire team,” Martin said. “Obviously we had a bad start, I think if we had a better start, we would have been more in that game, than it had shown on the screen.”

The game Saturday night provides CSU (10-18, 6-9) with the opportunity to come out strong within the first minutes, and practice their fundamentals against (7- 21, 2-13) Nevada.

“We need to work on fundamentals and we will be fine,” Heimstra said.

The win will put the Rams in the right direction, going into the MW tournament, but only if the CSU offense is able to make the shots on the field.

CSU currently sits in sixth in the Mountain West standings, and has clinched at least that seed in the conference tournament. The Rams can move into a tie with New Mexico for fifth with a victory, but the Lobos won the tiebreaker.

“We can not overlook this team at all … they beat Fresno,” Heimstra said. “They don’t have anything to lose, we just need to make sure we get the win.”