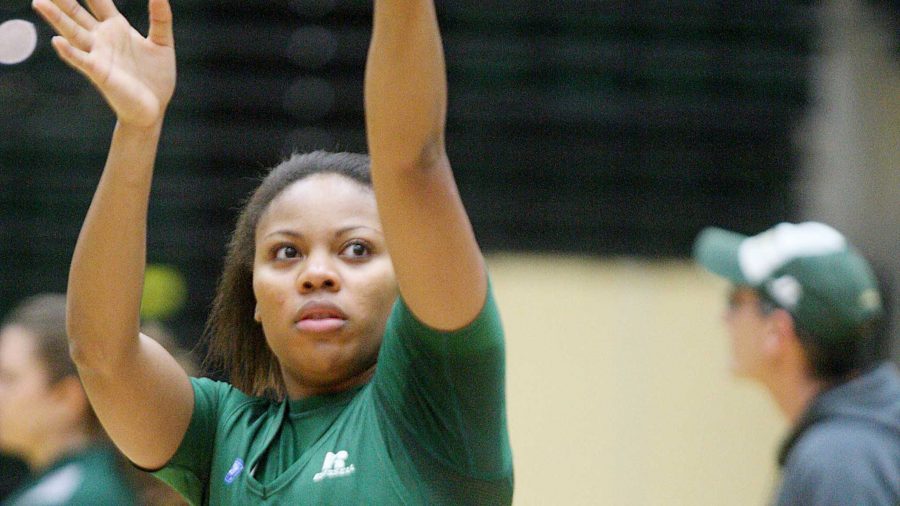 LaDeyah Forte (1) shooting during a paired shooting drill at practice Monday afternoon in Moby Arena. The Rams are preparing to play against Boise State in Idaho tonight at 7 PM.

It took a putback layup with one second left by junior Hayley Thompson to give the CSU women’s basketball team its second conference road win Jan. 30 at Boise State.

The Rams now have a chance to sweep the season series with the Broncos Saturday in Moby Arena at 2 p.m.

CSU has lost its last two games and are currently 9-17 overall and 5-8 in the Mountain West.

It will take a strong defensive effort for the Rams to break their two game losing streak.

“We need to hold teams to low scores,” Martin said. “We are capable of winning this game.”

Focusing on their offense for this Saturday’s game against Boise State, CSU needs to make the easy shots and put up constant points.

The Rams shot 35 percent Wednesday against Fresno State, and made only four of 16 3-pointers.

After starting off the first half even with the Bulldogs, the Rams were out-scored in the 27-14 in the first half, but battled back to win the second had 28-22 despite the 49-42 loss.

Senior Lauren Lenhardt lead the Broncos to an 18 point victory Wednesday in Fresno, scoring with 20 points. Boise State had three other players in double figures and scored 45 first-half points.

“We gotta make sure they are matching their efforts,” CSU coach Ryun Williams said. “We gotta take it one game at a time, gotta find a way to be productive.”

“I think were gonna come in as a strong team against Boise,” freshman guarVarsho said. “We know we can compete.”