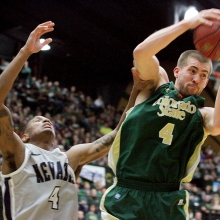 After building a 39-21 lead at halftime of their season finale Saturday night, it appeared that CSU was about to cruise to a season-ending victory against Nevada.

But not many games come easily in the always-competitive Mountain West and the Rams needed to another big game from senior center Colton Iverson to pull out a 77-66 win.

CSU senior guard Dorian Green left the game with 11:25 remaining in the first half with a sprained right ankle and would not return, but Iverson managed to pick up some of the slack on the offensive end.

Iverson led the Rams with 21 points in the game while pulling down nine rebounds and at times carried the Rams offense.

Nevada, which was down by 20 points multiple times in the game but were able to battle to within seven points with just two minutes remaining in the game.

The Rams, however, were able to survive Nevada and junior guard Deonte Burton’s 27 points thanks to the play of their starting seniors, each playing in his last game in Moby Arena.

In addition to Iverson’s scoring, CSU senior forward Pierce Hornung was able to tally 16 points and 13 rebounds, notching his sixth double-double of the season.

Senior guard Wes Eikmeier was also able to chip in 20 points while hitting four of the final six free throws of the game that ensured a Rams’ victory.

Though the Wolfpack was able to mount a rally in the second half, it simply wasn’t enough to get them out of last place in the conference on the last day of the regular season.

The victory for the Rams places them in second place in the conference after Fresno State upset UNLV on the road earlier Saturday night.

The result will ensure that CSU will play against Fresno State in the first round of the Mountain West Conference Championships next Wednesday.

Nevada will be forced to play in the 8-9 game on Tuesday next week against Wyoming with the winner of that game being pitted against the conference’s No. one seed, New Mexico on Wednesday.

For more in-depth coverage of tonight’s game, be sure to check out Monday’s Collegian