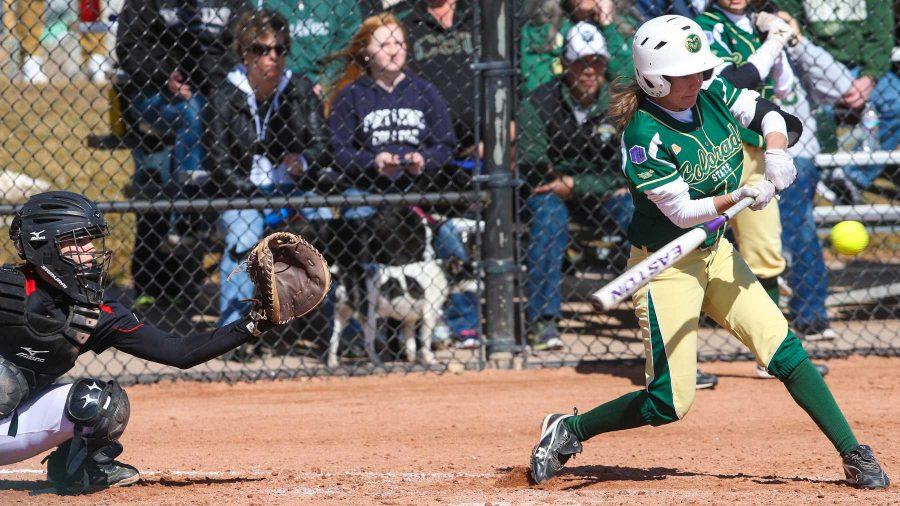 Cassie Mosser (21) hits the ball during Saturday's game against Nebraska Omaha at Ram Field during the Colorado State Classic Tournament. The Rams fell to the Maverics 3-2 in extra innings.

After struggling offensively in its last tournament, the CSU softball team found their bats for the Colorado State classic over the weekend.

CSU scored 24 runs over the weekend ended the tournament with a 2-3 record, finishing third in tournament standings behind Washington (4-0) and Nebraska Omaha (4-1). Tied with CSU, Bradley ended the weekend at 2-3 and Brown finished last at 0-5.

Bradley star sophomore Alyson Clemente entered the game with a .524 batting average and 16 RBIs, but couldn’t find her swing in the tournament.

CSU senior pitcher Kacie McCarthy added nine strikeouts on the weekend and gave up nine runs, but she gave up two home runs against No. 18 Washington Sunday game to drop the Rams under .500 for the tournament.

“I thought we all came out strong this game and the last game, we competed with every inning, every out, and every pitch,” McCarthy said after game two of the weekend. “I thought that for my part I was working on getting those pitches to get ahead of the batters.”

But the Rams couldn’t muster enough offense to match their strong pitching.

“I talked to them about if they have that kind of fight and that good of technique after that last game, we should be doing that all the time,” CSU coach Jen Fischer said. “I just didn’t think we had that fire that we need.”

The Rams their homestand Wednesday against UNC at 4p.m.

“Hopefully we can understand that, and move forward from here,” Fischer said.

CSU will then head to San Diego, Calif. to play in the San Diego Classic II tournament, March 15-17. The Rams will play five games against Fairfield, Harvard, Massachusetts, Miami (OH), and Seton Hall.