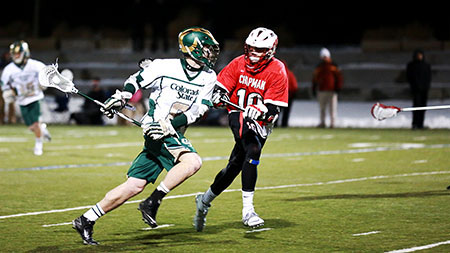 Tim Taggart (8) goes on the attack against Chapman defenders. The victorious Rams scored twice in the last five minutes of the game to tie it up and lead them to overtime.

On an icy, cold evening in Loveland, the No. 1 ranked Rams men’s lacrosse team overcame a late two goal deficit in the 4th quarter to beat No. 5 ranked Chapman 5-4 in triple overtime.

The first half was a defensive battle. The Rams gained a 2-1 lead after senior captain Austin Fisher scored and missed numerous man-up chances to continue burying Chapman. Eventually, the Panthers found the net to tie the game at two at the half.

“These guys were well prepared for us,” junior Sean Smith said. “They knew all our plays and all our sets, so we just had to man up to get past them and score.”

The resilience of sophomore Chapman goalie Warren Nielsen kept the Panthers in the game. He came up with one big save after the next and seemed like nothing would go by him.

“It’s so tough with a defense like that,” Fisher said. “Their goalie got really hot and it seemed like he was stopping everything.”

The defensive deadlock continued throughout the third quarter and neither team was able to notch any goals.

Chapman took its first lead in the game with seven minutes left in the 4th on a goal by junior Alex Williams. They scored again with 4:45 left to take a two-goal lead, seemingly distancing themselves from CSU in a very low scoring game.

“We didn’t panic when we got down because we have been in that position so many times before,” Smith said. “We have got a lot of experience on this team, and it comes up so big when we are down.”

The Rams answered quickly to come back within one. Then, with 1:30 left, found Devlin found Fisher on the crease for the one timer to tie the game at four.

In the first overtime and second overtimes, the Rams continued to possess the ball for the majority of the time, but neither team had any real scoring chances.

The defense was put to the test in the second overtime after they went man down on an illegal procedure penalty. However, they held on and came up with a few huge stops.

“We just had to grind this one out,” Fisher said. “Our defense came up huge, we put them in a hole a couple times with our penalties, but we just dug down deep to come out with the win.”

In the third overtime, the Rams took control. After a big defensive interception, the offense brought the ball down the field with a delayed penalty against Chapman. However, there would be no need for the penalty call as junior Sean Smith drove the ball from behind the net, put a dodge on his man and slipped in the game winning goal for the Rams.

“Every game is so important for us at this point in the season,” CSU coach Alex Smith said. “I was a little worried about today’s game because we only got to practice with once over the break, but our guys showed a lot of heart today.”

Lacrosse Beat Reporter Tyrus Coder can be reached at sports@collegian.com.