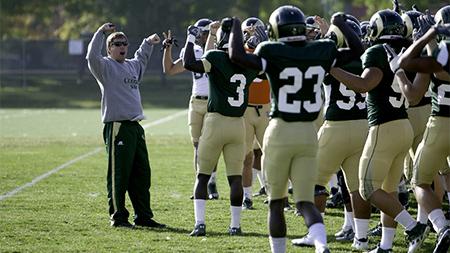 Jim McElwain rallies his team together before practice Wednesday afternoon on the practice football fields. The Rams will travel to San Diego State in hopes of improving on their current season record.

Similar to the snowmelt transforming into spring showers, the CSU football team is prepared to blossom into a new season.

The Rams took the practice field this week for the first time since November. Wednesday was their second of 15 spring practices allowed by the NCAA.

“We’ve been working all offseason as far as staying in shape with me throwing and receivers running routes, all positions have had specific drills. We haven’t been on the field in an official practice, but we’ve been putting in work,” redshirt sophomore quarterback Conner Smith said.

Smith, then a third-string quarterback, started two games for CSU after the injury bug stung the Rams at the position. Starter Garrett Grayson went down against Air Force with a broken clavicle before backup MJ McPeek suffered a shoulder injury vs UNLV.

The Rams will lose McPeek to graduation, but Grayson will return as a senior in the fall, leaving the starting quarterback position up in the air until coach Jim McElwain makes his final decision on who he wants under center.

“I think [Grayson] fell a little bit, I do, and I don’t think there’s no doubt about it. Yet, his presence wasn’t necessarily there either, I was hoping to get maybe a little more out of him, I guess I’m calling him out,” McElwain said. “I think it will come, he’s doing a good job and I’m glad to see everything’s good with that arm.”

The two prospective starters are not taking the unfilled position as a challenge, instead using the other to improve as leader of the huddle.

“For as far as I know we’re splitting reps evenly, today he ran with the ones and yesterday I did. We’re rotating everyday and there’s no hard feelings,” Grayson said. “I started a few games last year and they did good when he did, so I think he deserves a shot. We’re working together and not giving each other the hard shoulder.”

The quarterback position isn’t the only change the Rams have seen on the offensive side of the ball.

Redshirt junior Austin Gray spent last season at safety for CSU and has left the defense to fill the need at wide receiver.

“I actually played receiver in high school, that was my natural position so it’s fun moving back to that,” Gray said. “I’m just trying to be a team player and do what the team needs. Coach Mac and I believed this is where I needed to be.”

Gray’s switch is something that both he and McElwain are excited about.

“He obviously has played the position, it wasn’t like he was a fish out of water so that was a bonus. He came up with two really good catches yesterday, it will be interesting to see the film and how he progressed with the new install,” McElwain said.

The 15 spring practices the Rams have to improve will include two scrimmages before the spring game on April 20. The fall will present McElwain’s second season as CSU head coach after finishing 4-8 in 2012.

“Our expectations have to be set higher, I think part of what we’re trying to do is make sure each and every one of them are not satisfied with just good enough, but actually taking it to the next level,” McElwain said. “I don’t think they’ll ever get comfortable with what I’m asking them to do, and if they do get comfortable then I’m not pushing the right buttons.”