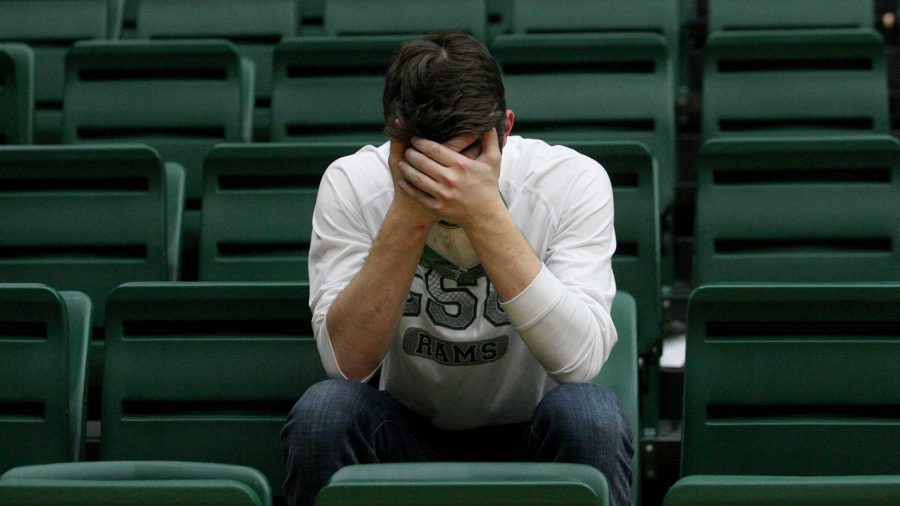 Junior business major Scott hall sits in defeat after the CSU men's basketball home loss against New Mexico Saturday in Moby. Hall got in line at 7:30 a.m. Wednesday in order to get tickets for the game.

When the clock struck zero in CSU’s 82-56 loss to Louisville Saturday night, the most successful season in Colorado State basketball history ended.

The Rams fell to the tournament’s top overall seed in  the Cardinals and with the result, seniors Dorian Green, Wes Eikmeier, Greg Smith, Pierce Hornung and Colton Iverson have seen their last action as members of the Rams.

“It’s hard to digest this loss,” Hornung said. “Give us some time to reflect on our season and how much fun we had and what we accomplished.”

This season, the Rams won 26 games, a school record.

They became ranked in the Associated Press’ top-25 poll back in February for the first time since 1954.

And the Rams did it through fundamentals. They had the top rebounding margin in the country (+11.4) and the fourth-best rebounding average per game (40.4) in the nation.

Due to the accomplishments CSU had throughout the regular season and the leadership of the team’s starting five seniors, Louisville coach Rick Pitino pegged the Rams as one of the most dangerous teams in the tournament ahead of Saturday’s game.

“I thought this was a great basketball team,” Pitino said. “They pass great, they cut great. Obviously, the number one rebounding team in the country. They shoot it with great range, and (CSU coach Larry Eustachy is) one of the most underrated coaches in our game.”

The foundation of what CSU basketball has been about this season: defense and rebounding, was notably absent Saturday night.

The Rams were out-rebounded 29-24 by Louisville, just the third time that has happened to CSU this season.

“They didn’t do anything special, I mean, they’re just big and physical,” Iverson said. “We didn’t block out necessarily as well as we usually do, and I mean, there was no special recipe to this game. They just outworked us.”

The Cardinals also managed to outwork the Rams on the defensive end, forcing CSU to commit 20 turnovers in the game, which led to 24 Louisville points. CSU’s average for turnovers per game during the season was just 11.

“You can’t simulate how they come at you and I knew it,” Eustachy said. “I thought if we could do certain things, we could hang with them, I really did. … (but) Our guys have no quit in them, none of us do, we kept trying.”

CSU was faced with a raucous environment in Rupp Arena that felt like a home game for the Cardinals Saturday night.

Despite the result for the Rams Saturday night, the 2012-13 basketball team will be remembered for much more than a tournament loss to Louisville.

They will be remembered for a home winning streak that at one point reached as high as 27 consecutive games.

They will be remembered for becoming the first CSU team in 24 years to win an NCAA tournament game.

Or, more likely, they will be remembered for a group of five seniors whose chemistry on the floor was undeniable and who see each other as members of a family.

“I don’t want this game to define our season,” Eustachy said.

“I told the guys that with a lot of tears in the locker room, and this is one of the few teams, it’s the only team, I didn’t want the season to end. I really wanted to go to practice on Monday, but we caught a as well-coached team as I’ve ever played against and that’s — I think that’s saying something.”