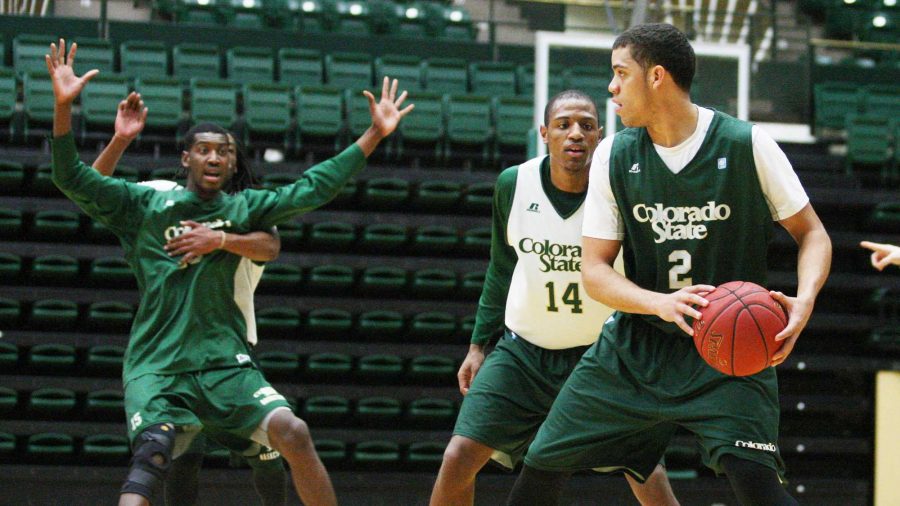 Sophomore Guard Daniel Bejarano, 2, looks for a pass in practice during practice last week in Moby Arena. Tomorrow the Rams will be traveling to Laramie to play at 8 p.m.

Going on the road to play your rival is a big challenge, doing it in a hostile environment on your rival’s senior night is even harder.

Wyoming could be without its leading scorer on the season, senior forward Leonard Washington, who left the Cowboy’s last game against New Mexico due to a back injury, but that won’t make the Rams take the game lightly.

“I don’t care who they put out on the court,” CSU coach Larry Eustachy said.

“Obviously they’ve lost some key players, I know Leonard Washington from five years ago. But they always have a chance to win because of (their coaching) and how they play so it would be a big upset if we can go up there and get it.”

Standing in CSU’s way is a Wyoming team that won its first 13 games to start the season, but says it is motivated to finish off the season strong against CSU after posting a disappointing 4-11 record in the Mountain West Conference this year.

“I think it would just put the icing on the cake,” Wyoming senior guard Derrious Gilmore said on Wednesday.

“I think it would mean everything for us to get this win tomorrow night. Just having focus and knowing what we have to do on both ends of the floor and to play against a real good team like this. …it would mean a lot to win this game.”

The Rams have been a team trending in the right direction for most of the year until their recent skid in which they have lost three of its last four games.

The game Wednesday night provides CSU with the opportunity to get things going in the right direction ahead of its final regular season game of the year Saturday night against Nevada.

The Rams will try to improve upon its efforts on the boards in order to get back to playing the way they did earlier in the year.

In their last loss to Boise State, however, CSU won the rebounding margin by just one, while not having a single player record a double-digit rebounding total.

“I don’t think it’s a problem, it’s just us getting back to the way we’ve been playing all year,” CSU senior guard Wes Eikmeier said.

“The numbers don’t lie so we’ve gotta just go into this game tomorrow night with a different mindset.”

It likely won’t be easy for either side, however, as a win against a bitter rival could help the winner gain momentum ahead of the MW Championships next week.

“This would be a monumental win for us, for our fans and everybody here would love it,” Wyoming sophomore forward Larry Nance Jr. said.

“But we’re not really looking forward to the MW tournament right now, we’re just focused on tomorrow and tomorrow only.”