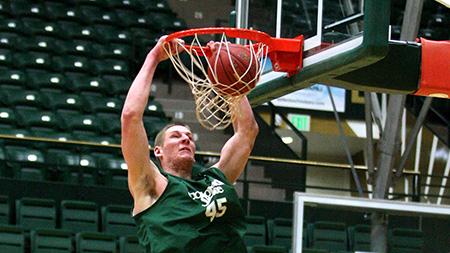 It’s easy for the CSU men’s basketball team to identify with Boise State. They were in the exact same position last year that the Broncos find themselves this year.

Boise State has faded from major NCAA tournament talk after a fast start, but a late run of conference wins and a deep run in the Mountain West tournament could place the Broncos squarely in the conversation for a trip to the big dance.

It starts with picking up wins at home and Boise State has that chance against CSU Saturday at 6 p.m.

The Broncos are hosting a blackout for the game, complete with Nike-sponsored black jerseys, and will look to extend their sixth consecutive home win. Only MW-leading New Mexico has escaped the Taco Bell Arena with a victory this season, and that came in overtime.

“We’ve played in the toughest environments in the conference already this year, we’re not going to let it phase us,” CSU senior center Colton Iverson said.

CSU coach Larry Eustachy experienced Boise State’s arena at its most raucous coaching at Idaho from 1990-93 and expects a similar environment Saturday.

“I’m sure it will be that atmosphere, the game’s so important to everybody,” he said. “We just have to get our game onto their court, it never really changes.”

Holding a one game lead over UNLV for second place in the MW will be on the line for CSU while Boise State is trying to tie San Diego State for fourth place in the conference standings at 8-6.

The Broncos have excelled with a high-scoring, efficient offense, leading the MW with 73.9 points per game and ranking second in the conference shooting 46.6 percent from the field.

“They’ve got a lot of weapons, they’re a dangerous team because everyone can shoot the ball and score for them,” CSU senior guard Dorian Green said.

Chief among those weapons are the conference’s fourth and seventh leading scorers, respectively, in sophomores Anthony Drmic and Derrick Marks.

Drmic scores 16.9 points per game while shooting 38.6 percent from the free throw line while Marks averages 15.7 points and four assists per game.

“Drmic can definitely shoot it, he’s really aggressive,” Green said. “They’re both really aggressive and with Marks he’s good off the bounce. You’ve got to keep him out of the paint, contest his shots, be physical with him.”

The Broncos will have one more shooter that wasn’t available in their 77-57 loss in Fort Collins on Jan. 30.

Junior Jeff Elorriaga missed that game with a concussion and will bring his MW-leading 45.4 percent three-point shooting to the floor.

“He makes them that much more dangerous,” Green said. “It comes down to not being late on catches, contesting shots, making them work for it.”