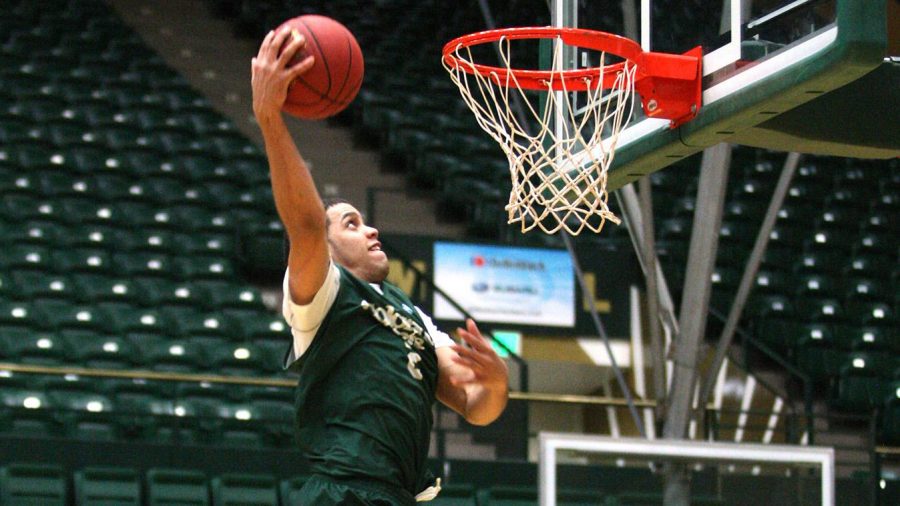 Sophomore Guard Daniel Bejarano, 2, leaps for a dunk in practice last week in Moby Arena. Tomorrow the Rams will play Nevada in Moby at 6:30 p.m. for the last home game.

The CSU men’s basketball team is on the verge of making history, and one is the magic number.The Rams have a single game remaining on their regular season schedule, a home matchup with Nevada Saturday at 6:30 p.m.

CSU is also one win shy of breaking the school record for most wins in a single season, currently at 23.

“That’s special,” senior guard Dorian Green said. “It would be a great achievement, but we know we have a lot of basketball left to play. We’re so in the moment right now that we’re trying not to focus on it, instead on what we have to do to beat Nevada.”

Nevada is currently sitting at the bottom of the Mountain West conference with a 12-17, (3-12 MW) record. The Wolfpack are currently experiencing a hangover after going on a five game win streak midway through the season, losing nine out of the next ten games coming into Saturday.

Although CSU is the projected favorite, the Rams aren’t letting themselves look past Nevada.

“They’re more talented than their record shows,” senior guard Wes Eikmeier said. “I’m sure they play with a chip on their shoulder too, everybody is trying to get a win before the conference tournament starts. We’ll be ready for their best shot and we’re going to have to play well.”

Starting senior guard Malik Story and junior Deonte Burton lead the Wolfpack. Story is averaging 16.6 points per game while Burton is close behind with 15.4, good for the fourth and sixth best within the conference. Both scorers are averaging more points than any CSU player.

“Those guys are really good players and they’re going to get points. They’re going to do things that a lot of other guys in this conference can’t do,” senior forward Greg Smith said. “We just have to have a lot of thought to how we play them.”

“Sometimes it will be contesting their shots and just making sure they don’t catch the ball. If we take them out of some things, they will get frustrated and we hope that that works for us.”

Saturday will be the second game between the Rams and Wolfpack this season. The first time the two met was on Feb. 6 in Reno, where CSU pulled out a four-point victory, 73-69.

“As we saw the score down there last time, this isn’t an easy game,” Smith said.

With a victory, CSU will secure a second place finish in the MW, giving them a No. 2 seed with which they would enter the conference tournament.

“We definitely want to go out on top. We broke our streak, so now we have to continue a new one,” Green said. “You always want to play your best ball at the end of the season, we will have to do that to make a run in the conference and NCAA tournaments.”