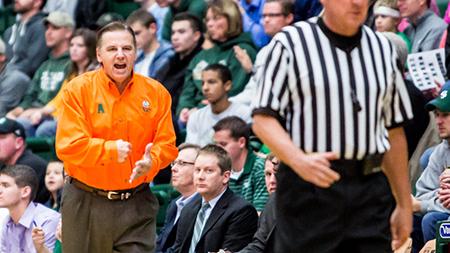 When one opposing player shoots lights out and scores a career high in points, he had a great game.
When another one does it, you start to worry.
When three do it in four games, it’s an epidemic.
The CSU basketball team caught a virus recently, and if it doesn’t find an antidote then deep runs in the Mountain West and postseason tournaments are out of the question.
In the Rams’ last four games, they have surrendered 45 points to Air Force’s Michael Lyons, 46 to New Mexico’s Kendall Williams and 38 to Boise State’s Derrick Marks.
Fresno State’s Kevin Olekaibe was well on his way to that type of game when he made his first five threes en route to 15 points in the first half before Jon Octeus put the clamps down.
Eustachy insists that there’s nothing wrong with the team’s defense: “No one could have stopped him tonight,” has become a refrain.
The symptoms suggest otherwise.
In all four cases, CSU initially insisted on going under high ball screens rather than fighting through them, which gave the shooters enough space to sink near-open 3-pointers.
Once they got rolling, it didn’t matter what kind of defense CSU played beyond denying the ball.
Every shot these guys took looked good; hand in their face; fading away, couple steps beyond the 3-point line… Didn’t matter.
Rhythm and confidence propelled through the net, snapping it like a bullwhip cracking against CSU’s broken backs.
Particularly Marks and Williams; every time they raised up, you knew the ball was going in.
Fans were left to swear, drink and throw their hands to the sky, realizing they can only watch and question how anyone can be that on fire.
To a point that’s all that can be done. Lyons, Williams and Marks all knew that they were in the zone, and were going to take as many shots as possible regardless of the defense.
Williams made all five of his 3-pointers in the second half and 10 of 13 despite shooting 32.3 percent from behind the three point line for the season prior to that game.
Marks hit his last 11 shots and at one point scored 24 consecutive points for the Broncos.
The solution is not letting good players and good shooters get to the point where they feel invincible.
CSU looked like it had found a solution in their defense of Olekaibe, but it turns out “put Jon Octeus on him and have him deny the ball,” is not a comprehensive panacea.
Octeus picked up four personal fouls in seven minutes and lost Marks several times on back cuts and straight drives.
Playing him straight-up with Dorian Green wasn’t the answer either. Marks drilled straight-on 3-pointers over Green’s outstretched hand multiple times within the first four or five seconds of the shot clock.
If CSU finds itself in another situation where one opposing player is lighting them up like a cartoon character with a fork stuck in an electrical socket, the coaching staff needs to consider changing the team’s defensive scheme because staying the course in that situation is not working.
One player can get hot and carry his team to any tournament championship, and if CSU runs into someone playing like that in the conference or any postseason tournament the Rams won’t make it through the night.
There’s not much time left in the season, but this illness developed quickly and can be cured just as fast with the proper adjustments.