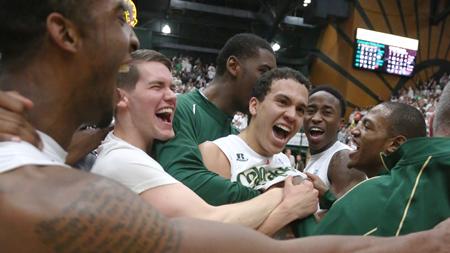 The Rams are dancing again.

The CSU basketball team (25-8) has been named a No. eight seed in the Midwest Region of the 2013 NCAA Tournament, and the Rams are making their second trip in as many years to college basketball’s biggest stage.

CSU will match up against ninth-seeded Missouri in the round of sixty-four. Missouri finished 23-10 in their first year of SEC basketball.

The Rams find themselves in the middle of a tough bracket, led by No. one overall seed Louisville, second-seeded Duke, and third-seeded Michigan State.

Players, family, and fans erupted as their eight seed was announced at a watch party at The Rio in Old Town Fort Collins.

Unlike last year, when CSU’s tournament bid was not certain going into selection Sunday, the Rams were a lock for the dance this year.

“It definitely changes our mentality knowing we are going to be in,” senior forward Greg Smith said. “And knowing that we are in because of our product of work, that’s a great feeling.”

Last year, the Rams grabbed an 11 seed as an at-large bid and lost in the first round to sixth-seeded Murray State. Now, CSU will be the higher seed in their first round matchup.

CSU will have to correct some of their mistakes from Friday’s 75-65 loss to UNLV in the semi-finals of the Mountain West Tournament. They could not contain UNLV’s dynamic pair of freshman, Katin Reinhardt and Anthony Bennett, who combined for 40 of the Rebels’ 75 points.

CSU will have their hands full with a tough Missouri team that rebounds just as aggressively as the Rams. At 41.4 rebounds per game, Missouri is one of the few teams to sport a higher rebounding total than the Rams (40.4).

“We just need to do what we do,” Smith said. “As long as we get out there and attack the boards like we have all year, we’ll be fine.”

Much of CSU’s hopes are riding on point guard Dorian Green’s ankle, which he sprained in the season finale against Nevada. While Green played in the MW semifinal against UNLV, he acknowledged that he wasn’t at 100 percent.

“The pain wasn’t that bad, but I felt like I didn’t have my explosiveness and pop,” Green said. “It’s getting better. The good thing is that we have some time between now and next week for me to rest it.”

For the fans, the pandemonium surrounding this basketball team has reached a peak.

Riley Fisher, a senior health and exercise science major and longtime CSU fan, has watched this team grow into what it is today.

“It’s been crazy to see the increase in fan support. They went from having a couple hundred fans in the stands to selling out Moby and drawing huge lines for tickets,” he said.

The Rams will have to travel to Lexington, Kentucky and face a potential matchup against the tournament’s top seed in the second round, Louisville.

“That’s just how it goes,” said Smith. “We just want to go out there and play our game and worry about us.”