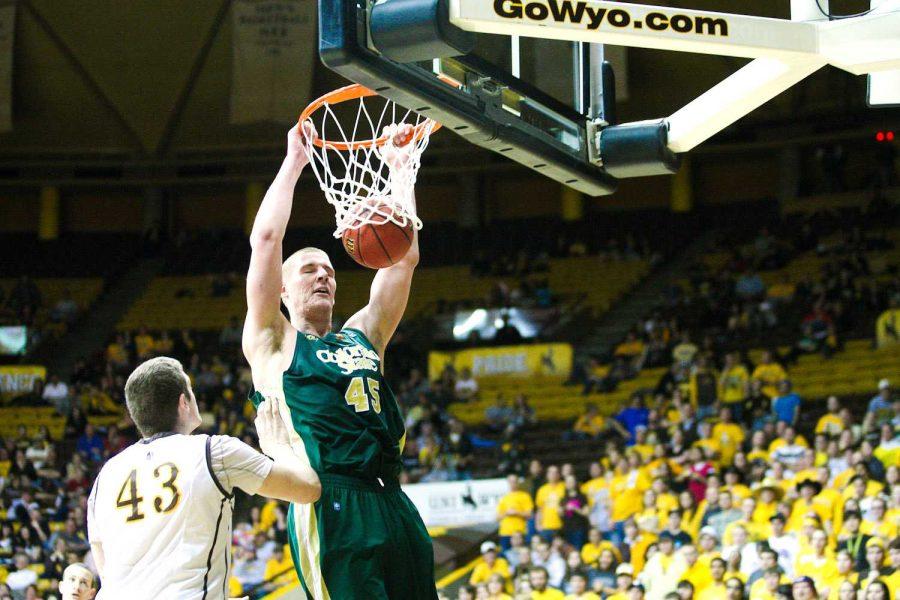 The smile on CSU senior forward Greg Smith’s face could be seen from a mile away Wednesday night in Laramie with four minutes left in the game against Wyoming.

That’s because Smith and the rest of the Rams knew they were on their way to doing something special in blowing out a bitter rival 78-56 on the road on Wyoming’s senior night.

“It doesn’t feel any better winning anywhere (else) on the road,” CSU center Colton Iverson said. “And to go to into a rival’s house on senior night is something really special.”

After jumping out to a 10-7 lead, the Cowboys struggled to produce on the offensive end as senior forward and leading scorer Leonard Washington scored just three points while being hampered by a back injury sustained last Saturday.

“They scored 10 points right out of the shoot and I go ‘here we go again,’ but I thought our team really responded to my urging recently,” CSU coach Larry Eustachy said.

“It’s the best we’ve played, and Wyoming’s beat up, that’s obvious but they fight and I think they’re the best-coached team in the league so that makes this (better).”

The Rams were led by Iverson throughout the game, as the 6-foot-10 center posted a career-high 29 points in the game while tying a Mountain West record for consecutive shots made in a game going 12-for-12 on the night.

“It’s all a credit to my teammates,” Iverson said. “I wouldn’t have scored that without them, I mean, I didn’t even have to dribble for most of my shots it was just a layup or a dunk. And they just did a great job of giving me the ball.”

In addition to setting a furious scoring pace, the Rams also did something in the game that they focused on fixing all week against the Cowboys: Dominate the rebound margin like they did earlier in the season.

Behind Iverson and senior forward Pierce Hornung’s 18 combined rebounds, the Rams were able to win the battle of the boards by a 35-11 margin while allowing the Cowboys just two offensive rebounds in the game.

“I think we just played a lot looser tonight,” senior guard Dorian Green said. “We were just more aggressive. And when we play our game, we’re a lot better team and that makes the game a lot more fun so we’ve just gotta continue to play loose and just get better and better.”

The victory for the Rams gives the team 23 wins on the year, which ties a program record for wins in a season and 10 wins in conference play, the most CSU has had as a member of the MW.

The Rams moved into a tie with UNLV for second place in the conference and pulled 1 ½ games ahead of fourth place San Diego State.

CSU holds the tiebreaker for second place based on their better record against the Aztecs.

Wednesday’s game marks the final contest of the year for the Cowboys before the MW Tournament next week and was the last road game of the year for CSU, which will play its final regular season game Saturday night at home against Nevada.

“The trick is, when we step off that bus tonight, it’s over,” Eustachy said. “We’ve got a game Saturday that has more ramifications than you can imagine, it’s a game we have to win.”