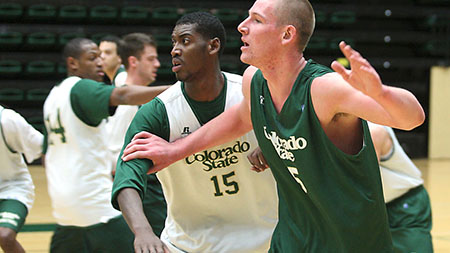 Senior center Colton Iverson became the fifth player in CSU history to be named all-MW and additionally earned the conference’s “Newcomer of the Year” award after sitting out last season due to his transfer from Minnesota.

Iverson averaged 14.6 points and a conference-leading 9.7 rebounds per game in his only season as a Ram.

He scored more than 20 points three times in his last six games and registered 14 double-doubles on the year.

Starting point guard Dorian Green made the all-MW second team after leading the Rams to a school record 24 wins and the conference’s second seed.

Green scored 13.1 points per game and dished out 3.9 assists per game while posting the fourth highest assist to turnover ratio in the conference.

Sophomore Daniel Bejarano earned the conference’s sixth man of the year award after sparking CSU off the bench with 5.6 points and 4.9 rebounds per game.