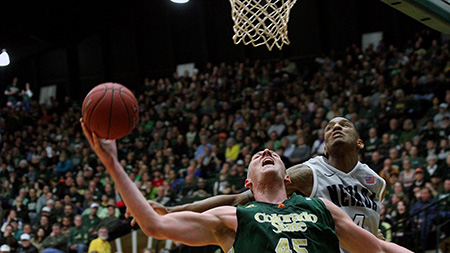 The Rams win their last home game against Nevada 77-66.

The feeling of walking into an arena for the last time of your career on senior night for many can be a huge distraction from performing well in your final home game.

The Rams and their five starting seniors, however, were able to shake off those feelings and notch win No. 24 on the year, a program record for wins in a season, in a 77-66 victory against Nevada Saturday night.

“It’s a tremendous accomplishment with the history of CSU basketball,” senior forward Pierce Hornung said. “There’s been a lot of good teams and to have the most wins, that’s an honor and that’s something we’ll take pride in, it’s huge.”

CSU was able to jump out to a 15-point lead in the first nine minutes of the game and never ceded control of the game despite senior guard Dorian Green leaving the game with 11:25 remaining in the first half due to a right ankle sprain.

Green has started in 127 consecutive games for the Rams, a school record, and when he left the game, there was a noticeable drop off in offensive productivity as the Rams shot just 31 percent in the second half compared to 57.1 percent in the first.

“He runs this team,” senior center Colton Iverson said. “He does a great job telling people where to go and we move the ball so much better when he’s in the game so we struggled a little bit but that’s just because we haven’t been working on it without him.”

Green said after the game that if the contest had gotten closer, he would have come back into the game and he will be ready for the Rams’ next game against Fresno State Wednesday afternoon.

After Fresno State upset UNLV Saturday in Las Vegas, CSU was guaranteed the conference’s second seed with a win Saturday night, the highest seed the Rams have ever achieved in the history of the Mountain West Championships.

“We had heard that Fresno was beating UNLV,” Green said. “But at the end of the day, we were only worried about ourselves right now. What other teams are doing isn’t really in our thoughts right now so we’ve just gotta continue to do what we need to do to be the best team that we can for going forward into the conference tournament.”

Had the Rams lost Saturday night, they would have received the tournament’s third seed, which would have given them a first round matchup with Air Force and Michael Lyons, who scored 45 on the Rams back in February.

The matchup with Fresno State tends to be a more favorable one for the Rams, as the Bulldogs have just one player who averages double digits in scoring with Tyler Johnson’s 12 points per game.

CSU will not take its matchup with Fresno State lightly, though, as the Bulldogs gave the Rams two tightly contested games this season despite having the conference’s worst offensive output this year.

“It’s about the last team we want to play under the circumstances,” CSU coach Larry Eustachy said. “But you’ve gotta play somebody. And for now we’re just gonna enjoy the moment that only one team finished ahead of us in conference play and that’s pretty monumental when you’re talking about the number one conference in the country.”