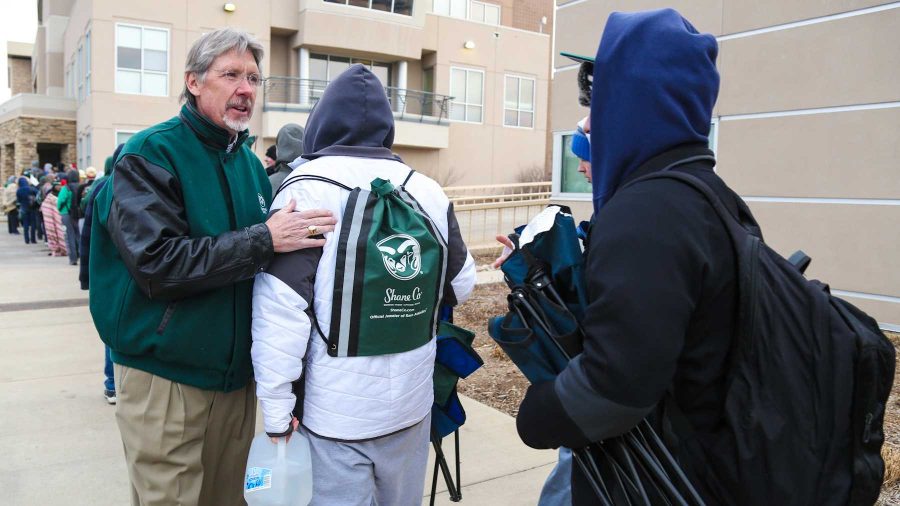 Colorado State athletic director Jack Graham thanks students for their devotion to the basketball program by waiting through the cold for tickets outside of Moby Arena Wednesday morning. Students began lining up as early as Tuesday night to be one of the first to grab their free ticket to Saturday's home matchup against New Mexico.

Moby Arena will be full for the third consecutive game, CSU students made sure of that.

Student tickets for Saturday’s game against No. 16 New Mexico sold out at 10:53 a.m., just over three hours after they went on sale.

Saturday’s game will be Moby’s third consecutive sellout this season, a first, and the first time CSU has ever had three  sellouts in a season, according to CSU Today.

Students that received that last 100 tickets yelled excitedly and raised the tickets to the sky as if they’d won the lottery.

Not everyone was so lucky.

Undeclared sophomore Chris Paffett was the next person standing in line when the tickets ran out.

“It wasn’t too big of a problem, it’s just another basketball game but it is disappointing,” he said. “Maybe I’ll check (the secondary market) if I hear about anything.”

Online student tickets sold out around 8:30 a.m., half an hour after online ticketing began, according to a tweet from the CSU athletic department.

The early line line wrapped all the way around the Moby Arena parking lot nearly to Shields Street and freshman geosciences major Truxton Blazek camped out Tuesday night, arriving at 11 p.m. the evening before.

That line took roughly an hour and a half to negotiate and students received coffee from the athletic department for their dedication.

Once the initial rush subsided, students were able to get through the line in a half hour.

“It wasn’t too bad, we only had to wait for 30 minutes, but it was totally worth it,” junior biological sciences major Jacob Garvin said.

Some students took advantage of an overwhelmed ticket office and picked up multiple tickets after waiting in line again once it slowed to roughly a 10 minute wait.

Sophomore environmental sciences major Blake Besancon and his friends waited in line a second time to pick up tickets for friends.

“We got buddies that are still sleeping,” he said.

Athletic Director Jack Graham opened the ticket window 10 minutes early after delivering a speech to the students waiting in line in the morning.

It was an early morning for the staff working in the ticket window, they arrived at work at 7:30 a.m. and handed out tickets consistently until they ran out just before 11 a.m.

“We’ve had great walkup and a lot of people claiming tickets for the last two games,” ticket operations manager Jessica Stremming said. “It’s been great to see the interest from the students, what an experience.”
Related articles