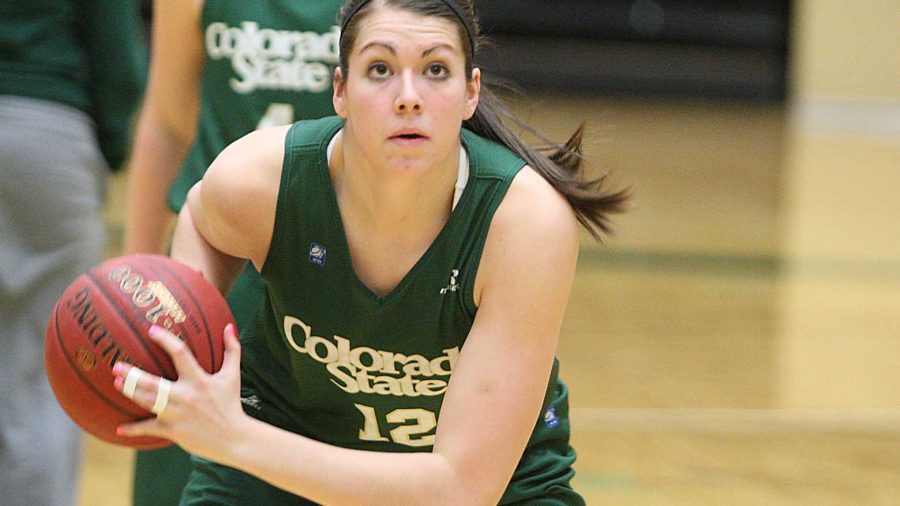 Junior forward Sam Martin prepares to attack the defense in the triple threat position. Martin became only the sixth CSU player to surpass 1,000 points and 500 rebounds in her junior season Wednesday.

These five players are the select few that have been able to reach 1,000 points and 500 rebounds before their senior year at CSU.

Although her individual accomplishments have the heads of the Mountain West turning, Martin takes her job title as teammate to heart more than any personal statistic.

“It’s a cool accomplishment that one day I will be able to tell my kids what I did in college, so I’m proud of being a part of that group,” Martin said. “But it doesn’t mean as much to me as my teammates will later on, or what we do as a team.”

Attaining the noteworthy milestone is the product of an inspiration that struck Martin at the age of five, when she first began playing sports. She started her athletic career early on the soccer field, also dabbling in volleyball before finally deciding that basketball would be the one she would ultimately pursue.

“It all started in the kindergarten, first grade range,” Rob Martin, Sam’s father, said. “It’s funny, I remember taking a bunch of kids from her soccer team and putting them on the basketball court and having them play. That’s when she really, I think, fell in love.”

Her dad coached Martin for her whole life until she started participating in her school’s athletic programs. Both admit that she was treated differently than the other girls on the team, but would eventually be something Sam was grateful for in the future.

Sam’s parents have always been there to help her move up to the next level if she desired it. When Rob Martin was told by his daughter that she had a goal of becoming a freshman varsity high school player, he made sure he did what it took to get her there.

“Sam has it, whatever ‘it’ is, she has it,” Chaparral high school coach Tony Speights, said. “She was a great role player. She would carry the water, whatever it took to be a part of the team. She was the ultimate team kid, and it helped her progress to where she’s at today.”

Martin’s next stepping stone was competing at the collegiate level. This time, getting there wasn’t the predicament she found herself in, but where she would play.

“There’s been schools knocking on her door since she was a young kid, it was just where at Division I she was going to play,” Speights said. “At the end of the day, I think she found a great fit at CSU.”

Regardless of the achievements beneath her belt, Martin still strives for more between the remaining of this season and her senior year. She may forget all about scoring 1,000 points if she leaves on top with a MW title.

“I came here wanting to help turn this program around,” Sam Martin said. “I’ve wanted to have a winning record, I’ve wanted to get fans into Moby for women’s basketball, and of course, I want to win the Mountain West.”