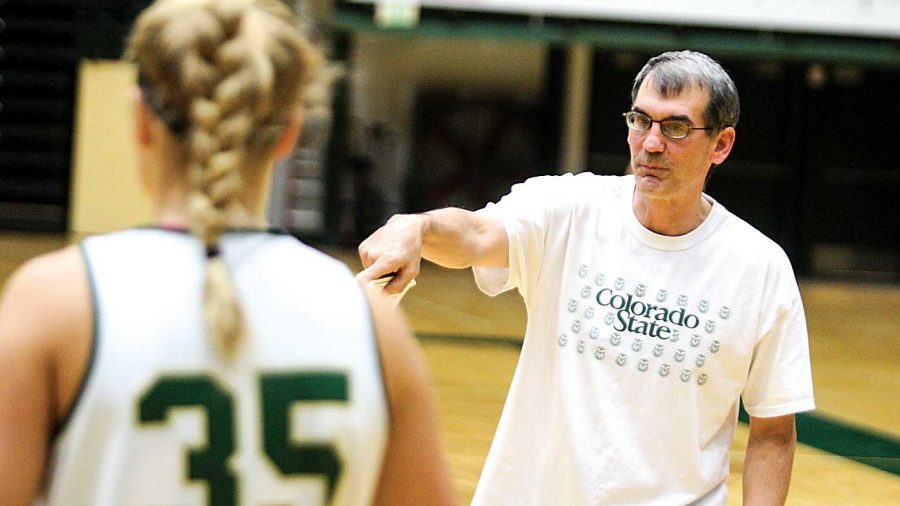 Assistant Coach Chad Lavin coaches the Rams at practice last week in Moby Arena. The team will face off against Air Force tomorrow in Moby at 2 p.m.

The women’s basketball team would love nothing more than to pack Moby Arena to capacity for Saturday’s “Pink Out” game against Air Force.

The Rams take on the Falcons for the second time this season at 2 p.m.

“We would really love people to come out and support Breast Cancer,” said junior forward Sam Martin. “We have pink jerseys, which is exciting.”

In their last match up at Colorado Springs, the Rams came away victorious with a 64-44 route of the Falcons. That win was their first in the Mountain West Conference and boosted confidences.

“We had some really nice possessions early,” CSU Coach Ryun Williams said.
“I thought we were really disruptive, and we rebounded the ball well.”

However, Martin and her teammates are not going to let the large margin of success faze them.

“Anyone can beat anyone on a given night,” Martin said. “You can’t think about how much we won by last time, it’s a new game and they are going to want to beat us even more.”

James, averages 9 points per game and has 168 rebounds on the year.

“James is just crafty on the inside,” said Martin. “She’s a really tough, get-down-to-it player.”

Leipprandt leads the team with 12.9 points per game and is also the ninth-leading scorer Falcons’ history with 851 career points.

Martin has reached 1,000 career points since the last time the teams met, but is not worried about the Falcons’ reaction to this milestone.

“They might try to double up, which has worked for other teams,” Martin said. “But we have other people that can score and get us out of trouble.”

Freshman Caitlin Duffy has made sure of that, averaging 11.7 points on the season, and scored 15 in Wednesday’s loss to San Diego State.

“Duffy had to earn those 15 points,” said Williams. “To beat good teams on the road, you’ve got to score. We held them well below their average.”

Still, the season has been a bit rough for the Rams, who are 7-15 for the season and 3-6 in conference play.

“Obviously it’s more fun to win games, but you can’t let that get you down,” said Martin. “We are playing really well, we just have to get past this bump in the road.”

A win for the Rams would tie them with New Mexico and could place them ahead of Boise State in the MW standings, where they are tied for 6th.

The charged atmosphere of home-court advantage at Moby should give the team the energy they need to defeat their in-state and conference rival.

“Coach says we have to get out there and ‘punch them first,’” said Martin. “We are going to play our game from the start and do everything we can to win.”