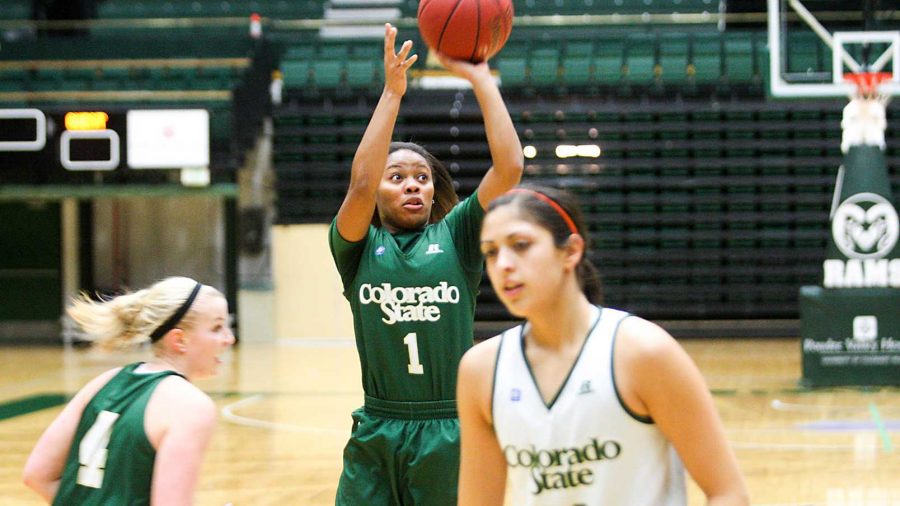 LeDeyah Forte (1) takes a shot at practice in Moby Arena on Monday. The Rams prepare to take on Nevada in Moby Arena at 7 Wednesday night.

CSU is looking to redeem itself against San Diego State after a comeback cut short.

On Jan. 13 the Rams fell to the Aztecs 44-48 with seconds left in the game, and they get their second shot at San Diego State Saturday in Viejas Arena at 8 p.m.

SDSU is 8-1 in the Mountain West and on an eight game winning streak.

If the Rams win against the Aztecs on Wed., CSU will move into fifth place in the conference and will increase their record to 8-14.

SDSU leads the MW in scoring defense at 54.3 points per game while holding its opponents to 34.7 percent from the field.

But its not all defense for the Aztecs.

SDSU ranks second in the conference, shooting 43 percent from the field, and boasts two of the top ten scorers in the Mountain West.

Hopkins was named the MW Player of the Week this week after averaging 15.0 points, 8.5 rebounds, 7.0 assists and 3.5 steals in two wins last week.

Clements and Hopkins only combined for 18 points in the teams’ earlier meeting while shooting 6-18 from the field, so CSU’s defense has a blueprint to follow on the high-scoring duo.

The Rams haven’t won on the road since a Jan. 16 victory at Air Force, and the Aztecs provide one of the conference’s stiffest tests.