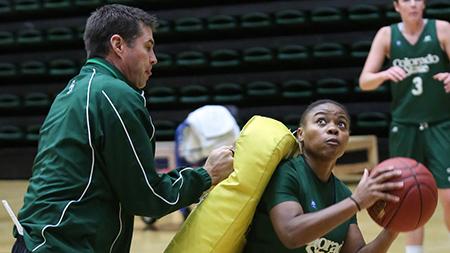 Guard LeDeyah Forte (1) fights through pressure from head coach Ryun Williams during practice Monday afternoon. The Rams are looking for their first win of the season tonight at Moby arena against UNC.

The CSU women’s basketball team hasn’t won consecutive road games all season, but after Wednesday night in Boise they have that shot Saturday at Wyoming at 2 p.m.

CSU downed the Broncos 57-56 on a last-minute shot by junior Hayley Thompson, but won’t be able to take Wyoming lightly.

The Rams haven’t won in Laramie in 11 years and this season’s Wyoming team is as good as any.

“It is always tough going on the road,” Thompson said. “We need to control our fouling early and work on rotating the defense better.”

The Cowgirls currently sit second in the Mountain West standings and rank in the conference’s top two in scoring and scoring defense.

“The coaches really put us in a good game plan,” senior Meghan Heimstra said. “We got to do it together as a team, and for each other.”

Senior Chaundra Sewell powers Wyoming’s offensive attack, leading the team in scoring at 14.6 points per game while bringing down a MW-leading 9.8 rebounds per game.

The Cowgirls boast three out of the top 11 scorers in the conference and one of the more dangerous three-point shooters –– sophomore Kaitlin Mileto.

In order to defend against so many weapons, the Rams emphasized that no one player makes a team.

It will take a collective effort to keep Wyoming’s legion of scorers in check, and CSU is up to the task.

“We need to stick together and work as a team,” Heimstra said. “We saw what we did right and what we did wrong, so we really need to focus on sinking and finishing shots.”

CSU coach Ryun Williams commended his team’s win over Boise State Wednesday, but stressed that the upcoming game against Wyoming is now the top priority.

“Rivalry games are fun and we are playing against a good team, we just can’t look at the past,” Williams said. “Win the game in front of us and then we will look to the next game.”

For Heimstra, there won’t be any more chances to win at the Arena Auditorium.

“We have not beaten them in Laramie yet,” she said. “I think it is time for a change.”