CSU hockey sweep over CU-Boulder ends in a ballroom blitz 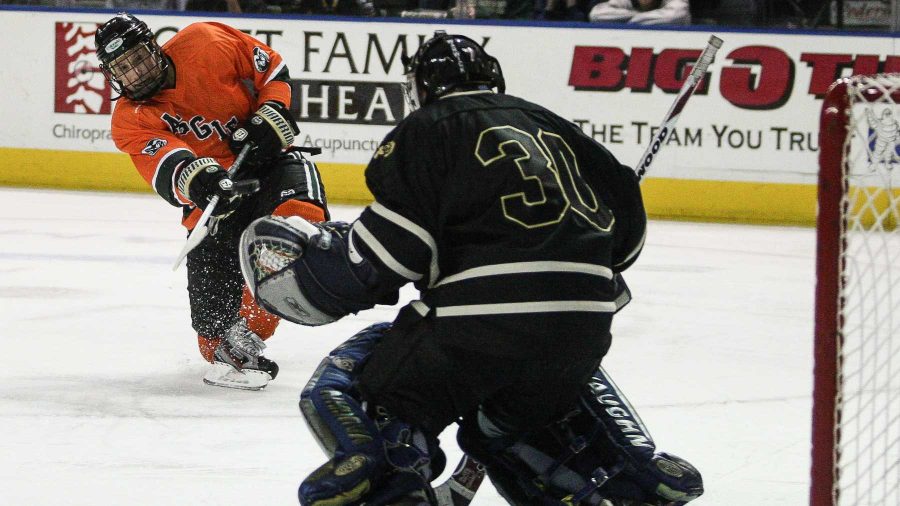 Vincent DiTirro (29) takes a shot during the second period of Tuesday nights matchup agains rival CU at the Budwiser Events Center. The Rams defeated the Buffs 7-3 to sweep the four game series.

If there was any doubt if the CU-CSU rivalry existed away from the football field, Tuesday night’s hockey game at the Budweiser Events Center answered it as soon as the puck dropped.

The hard hitting battle ultimately resulted in a 7-3 victory for the Rams, giving them the full sweep in their four games against CU-Boulder this season.

The tension was apparent for the entire game, but the rivalry showed its true colors when the gloves of CSU senior Matthew Stolzberg and CU defenseman Sam Kinney flew off for a brawl that went to the ice following the game’s turning point of CSU’s sixth goal of the night.

“That kid had been doing some stuff all game, until it finally came down to the green light that told me to go,” Stolzberg said. “It’s definitely fun to go out against them in an atmosphere like this, we put on a show for the fans.”

The Buffaloes have already been eliminated from any chance of postseason play, and it showed early that they were still looking for some bragging rights. They were the first to put the puck in the net, wasting no time, scoring just 4:23 into the game.

“We talked before the game, and all we wanted to do was give these guys a run for their money,” Kinney said. “It’s such a heated rivalry, always guaranteed for a fun game.”

CSU was able to answer with a goal of its own from sophomore forward Adrian Olson, allowing into to enter the first period intermission tied at one. The physical play began early, five different players sat in the penalty box during the first 20 minutes.

The second period was a shootout that witnessed five goals, giving CSU the 4-3 edge going into the final period of play.

“We started off the third kind of slow, we knew we were better than this,” CSU captain Paul Jenkins said. “After yelling at the team for a second, I pulled my linemen aside and told them that it was on us, this was our job.”

Jenkins then took matters into his own hands, shooting out to the left wing on a CSU break and firing a shot into the top right corner of the CU goal, putting the Rams up 5-3 with 10:15 left in regulation.

“When we put that in, you could just see them sink. They got rammed over,” Jenkins said.

Junior forward Erik Waring would shortly follow with a goal of his own that led to the fight that had the thousands of people in attendance on their feet screaming.

By the end of regulation ten goals were tallied, as well as 14 penalties and two ejections that each led to one game suspensions.

“This is the first time we’ve swept CU in four or five years, so it feels good to get it done for all of us seniors,” Stolzberg said. “We have to keep this energy and emotion rolling all the way to nationals.”