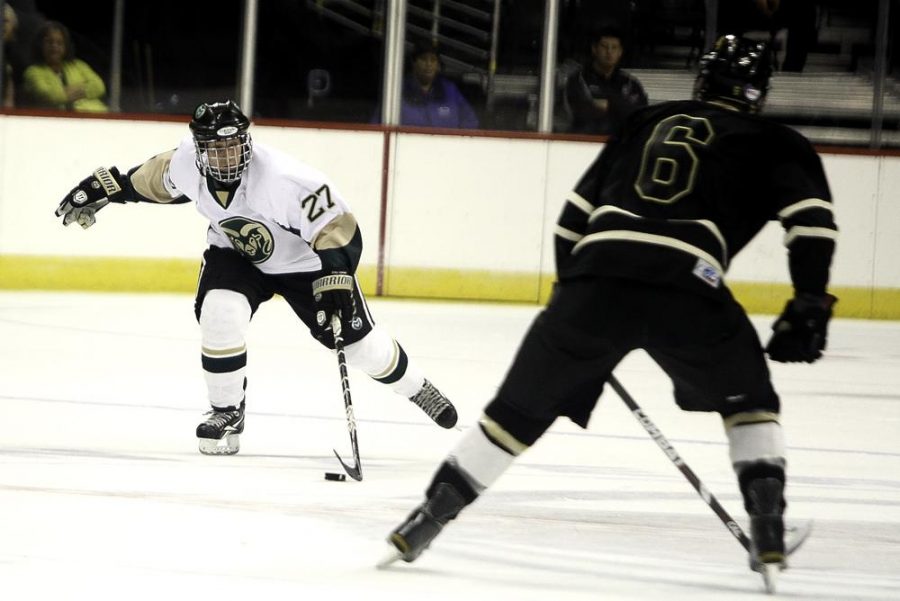 Forward Adrian Olson looks to score in the third period of Friday nights 5-2 victory over The University of Colorado at the Pepsi Center.

Skates will be laced up and gloves may very well come off. According to the CSU hockey seniors, it has all come down to this.

For the last time this season, the Rams will face-off against their rivals at CU-Boulder for a classic Rocky Mountain battle. However, this final matchup with the Buffaloes will be on the ice of the Budweiser Events Center in front of an Orange Out crowd expected to be the biggest attendance turnout of the year.

“It’s different at the Bud Center. This is our game we get to be surrounded by 4,000 CSU fans screaming for us,” forward Paul Jenkins said. “You feel like you’re in the show, in the pros, playing on that big sheet of ice in a huge arena.”

Tonight will mark the fourth meeting between the hockey teams this season. CSU has skated away victorious in all three previous meetings, outscoring the Buffaloes 23-6 on the year, an advantage that the Rams say could never be too big.

“That’s the way with any rivalry in any sport, there’s no love for CU at all,” forward Ben Smoot said. “You don’t just want to beat them, you want to embarrass them.”

For Smoot, Jenkins and the five other seniors on the CSU roster, tonight will not only be their final shot at an age-old rival, but possibly the last chance to play the game they love on a primetime level.

“They’ve got to be excited about it. This will be the last time they ever play in front of a crowd this size, and it’s against the Buffs, I expect them to step up for a great game and walk away with no regrets,” CSU coach Kelly Newton said.

CSU is currently sitting in the No. 8 position of the west region of ACHA Division II, awaiting a regional tournament appearance that will give them a chance to make it to nationals.

On the other hand, CU-Boulder is holding a 4-16-1 record and has been eliminated from all possibility of postseason play.

“I think they’re going to be playing for pride, they don’t want to be swept four games in a row by us,” Newton said. “I expect them to come out running and gunning; we can’t underestimate them by any means.”

A full season sweep over CU-Boulder is something that no current member of the CSU hockey club has experienced, including Newton, who has served as head coach for seven years.

“Their season has basically boiled down to coming after us, and we will be giving it right back,” Jenkins said. “It’s going to be a lot of fun to take it to them one last time.”