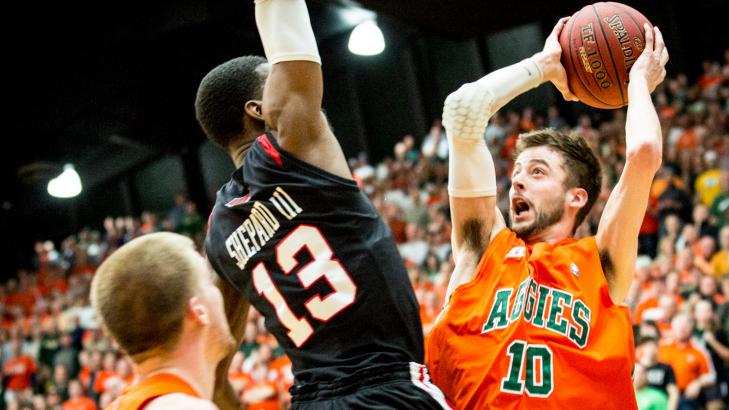 Key situations in tight games call for someone to step up and make a big play. On Wednesday night in Moby Arena, it was CSU’s Dorian Green that made the difference in securing the Rams’ twenty-seventh consecutive home victory in a 66-60 win against San Diego State.

At the end of the game, with the Rams trailing 60-58, Green took control of the game, hitting a deep three-pointer that gave the Rams a 61-60 lead with 1 minute 3 seconds remaining in the second half.

Following the timeout, Green drove into the lane and made a contested layup while being fouled. Green hit the ensuing free throw for his sixteenth point of the game and gave the Rams a 64-60 lead with only 19.4 seconds in the game.

“I just wanted to go out and make a play, whether it was for myself or setting someone else up for a basket,” Green said.

“(I was) just trying to be aggressive really and make a play and we know we have to step up in key moments and tonight it was me,” Green said. “Offensively I hit those shots but everybody’s done it throughout the season.”

San Diego State turned the ball over one more time as Greg Smith stole the ball away from Jamaal Franklin and he fed the ball up the floor to Jon Octeus, who finished with an emphatic dunk giving CSU a 66-60 lead with 10.3 seconds to play that iced the game for the Rams.

“You’ve got to be able to get a shot to have a chance to score,” San Diego State coach Steve Fisher said.

“But this was a tough, hard-fought game just like we thought it would be. We were in a position to win, we didn’t quite get it done, that’s what makes it hurt all the more.”

The victory for the Rams is the first since CSU became ranked No. 24 in the Associated Press weekly poll, putting the team in the national spotlight for the first time this year.

“We know it’s a special thing that now we’re ranked and we really just wanted to show people that we deserved it and that we can keep that going throughout the year,” Smith said.

“This is something that we felt like should have happened weeks ago but it hasn’t so now we’ve gotta go out there and show what we’re about.”

Up until the final minute of the game, San Diego State and CSU played a highly physical and tightly contested game. Throughout the entire second half, neither team was able to gain a lead of more than three points.

“We just made plays down at the end and I thought the game could’ve gone either way,” CSU coach Larry Eustachy said. “It was an unbelievable atmosphere, as good as I’ve been in.”

With the result, CSU (20-4, 7-2) maintains its position in second place in the Mountain West Conference and adds breathing room between itself and third-place San Diego State (18-6, 6-4).

Every game has become critical in the highly-unpredictable MW, and on Wednesday night in front of a packed house in Moby Arena, the Rams were able to solidify their place as one of the best and toughest teams in the conference.