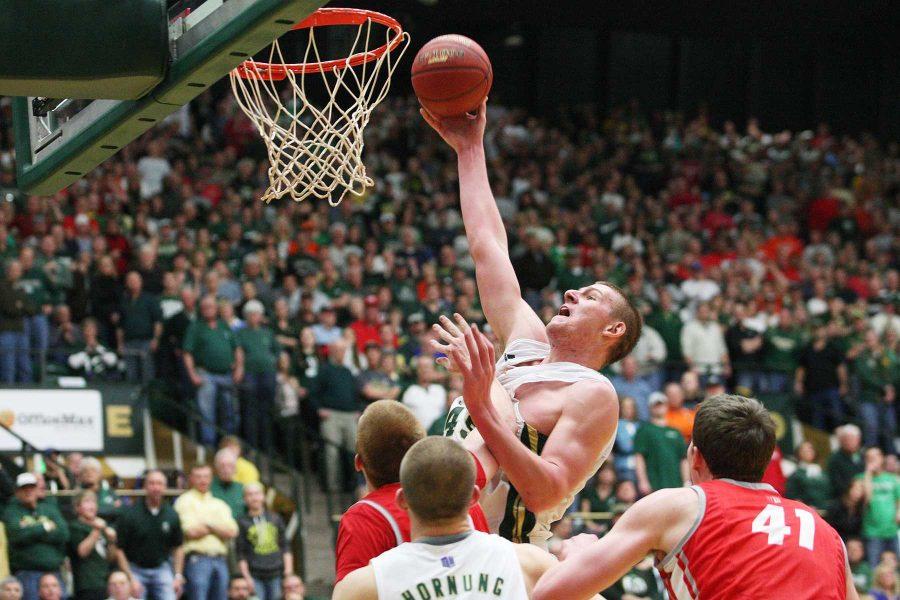 Losing at home isn’t a common occurrence for the CSU men’s basketball team.

But the effort from New Mexico guard Kendall Williams was the driving force that carried the Lobos past the Rams 91-82 on Saturday, snapping CSU’s 27 home game winning streak and handing the Rams their first loss in Moby Arena since Nov. 19, 2011.

Williams posted 46 points, 30 of them coming from behind the arch, setting a Mountain West record of 10 3-pointers made in a single game.

“We just gave him open looks early, he got hot and was just feeling it for the rest of the night,” senior guard Wes Eikmeier said.

The first two minutes of the game were scoreless, then the high scoring shootout began. Both teams combined for 55 field goals and nine lead changes before CSU entered halftime with a 41-38 lead.

“I thought it was pretty plain and simple, I thought the tougher team won, give New Mexico all the credit. Steve Alford had his team ready to go. We had no answer for them, we couldn’t stop them.”

As the players returned from the break, the pace of the game accompanied them. Eikmeier, who had only seven points in the first half, tallied 11 more in the opening four minutes of the second half.

After grabbing a six point edge over New Mexico with 6:40 left to play, CSU went cold. The Rams spent the following three minutes going 0-5 on their possessions, allowing the Lobos to go on a 14-2 run that silenced the crowd of 8,745 and would award New Mexico the conference victory.

“You can’t have the third team (in RPI) in the country out-determine you and have a chance, I don’t care if you’re playing on Mars, let alone in your home court building,” Eustachy said.

Saturday was the second time in three games that the Rams have allowed an opposing player to score 45 points or more, after letting Michael Lyons score 45 in the road game at Air Force last weekend.

“Right now it’s not about winning or losing, it’s about playing better. If we execute better and play our game, we’re going to win,” senior guard Dorian Green said. “We played just as poor against Air Force and won. Give New Mexico credit, they are the better team and more physical. We have to get better.”

CSU has now dropped two consecutive matchups for the first time since December.

“I think we got caught up in being on posters, all that. I think we forgot what got us on the posters,” Eustachy said. “We all need to do better, and we will.”

“I believe in this team, make no question about it, I believe in them. But you ask me to get a ouija board or a crystal ball and I can’t tell you how they’re going to respond,” Eustachy said.

“It’s hard to handle success, it’s a great life lesson for these guys.”