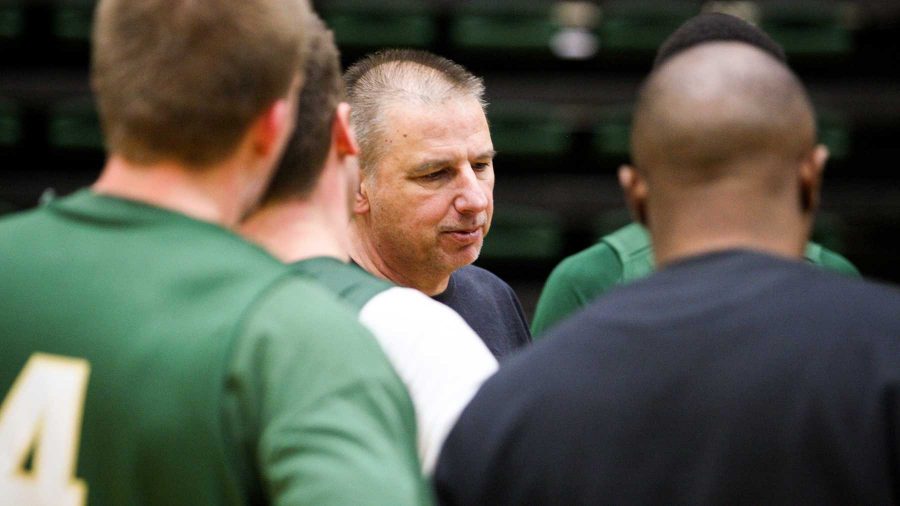 Head basketball coach Larry Eustachy talks to the team during practice Tuesday afternoon in Moby Arena. Tomorrow the Rams will be playing Fresno State on the road.

Maybe last year the CSU men’s basketball team would throw out a dud against a weaker Mountain West opponent, but not this team; not this year.

In 2011-12 CSU dropped road games to both TCU and Boise State, which finished fifth and last in the MW last season. In fact, the Rams were only able to win one road contest in conference play (Air Force) all season.

The makeup of this year’s squad, full of senior leadership, is ready to correct its conference road woes.

“It’s our thought process,” senior forward Greg Smith said. “We try to put a lot of thought into what we’re doing every day in practice, and everyday in who we are playing. Especially us seniors that don’t have many more of these chances to go play people. We got to cherish those moments.”

Road games are still not a strength for the Rams, who are 2-4 away from Moby this season, but coach Larry Eustachy sees the growth of his team.

“It’s clear that this is the smartest team I’ve ever had,” Eustachy said. “It’s clear to them that when we play this way we win, when we don’t we lose, so it’s that clear. It’s really more simple than complicated.”

CSU travels to Fresno State Saturday at 8 p.m., a new opponent in the MW, and sitting at the bottom of the conference rankings at 1-4 and 7-11 overall.

The Bulldogs’ biggest challenge has been putting the ball in the bucket scoring just over 60 points per game and shooting only 40 percent on the season, both last in the MW.

“They’re starting to shoot the ball a lot better,” Eustachy said. “They’re a good team and we have to play well to beat them. I watched them play San Diego State and I told the team, ‘I’m impressed with how good Fresno State is,’ so it’s going to be a tough game for us.”

Defense provides the backbone for Fresno State, which employs a zone look for much of the game. A zone defense requires strong communication and is rarely used for most teams, and sometimes lulls offenses to sleep.

“A zone gets you standing around, and that’s something in the beginning of the year that stood us up a little bit,” Smith said. “But we’ve been playing through it whenever we see it. Now we just out there and know what we’re doing on offense, and don’t let a zone or man or anything take us out of what we’re doing.”

“I love the Mountain West. I’m glad I’m playing in this conference because I think the Mountain West can battle with any conference Division I has,” sophomore guard Jon Octeus said. “I think it’s great. That’s what I’ve been working for … You want to play against people that everybody’s talking about.”