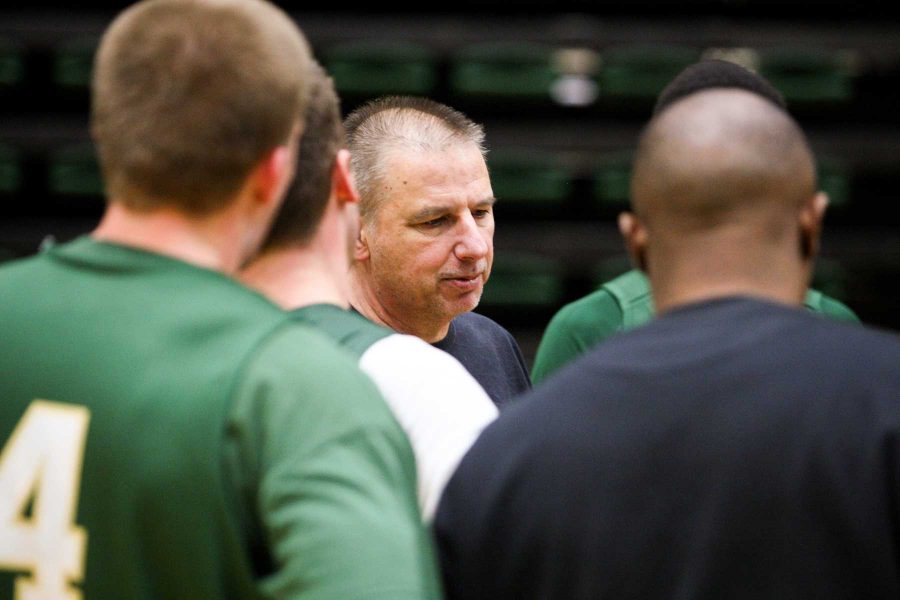 Head basketball coach Larry Eustachy talks to the team during practice Tuesday afternoon in Moby Arena. Tomorrow the Rams will be playing Fresno State on the road.

Going on the road in a ultra-competitive Mountain West conference and picking up a win is a challenge, and CSU knew it.

Leading Fresno State (7-12, 1-5 MW) by 18 at halftime it looked as though the Rams would cruise to their first MW road victory of the season– the Bulldogs had other ideas.

Fresno State opened the second half on a 19-6 run, but couldn’t ever get the margin smaller than five points. The Rams (16-4, 3-3 MW) held on to pick up their first conference road win, 74-63, and first road victory since Nov. 24 against Washington.

“We knew they weren’t going to lay down,” CSU coach Larry Eustachy said. “This is as hard-playing a team as there is in the league. They came back and I thought we withstood it. It was a great win for us.”

The Rams played as balanced an offensive game as they have all year with all five starters scoring in double figures. Senior guard Dorian Green continued his excellent play in MW games, leading CSU with 17 points and hitting all eight free throw attempts in the final minute.

As the case has been all year, CSU dominated the boards, nearly doubling Fresno State’s total, 40-21. Twelve of the rebounds came on the offensive glass helping the Rams to 15 second chance points.

CSU also found the free throw line 34 times, nailing 29 of them, to help keep the Bulldogs from ever threatening to take the lead.

Fresno State simply dug itself a hole too deep to climb out of.

“Anytime you’re playing a really good team, I think (CSU) is one of the best teams in the league, they’re an older team, an experienced team, you can’t give 20 minutes away,” Fresno State coach Rodney Terry said. “You have to have execution; you have to play for 40 minutes.”

In the second half Fresno State clamped down and followed the lead of junior Tyler Johnson, who scored a game high 23 points. The Bulldogs’ physical style of play closed the gap to 50-45, but a poor shooting night doomed them.

“Fresno State is one of the harder playing teams in our conference,” senior guard Wes Eikmeier said. “They have some losses, but they never stop fighting, so at halftime we knew they were going to claw back. We knew we’d have to play through some calls, like always on the road, and I think we showed a lot of guts down the stretch making plays and sticking with it.”

A shot clock malfunction in the first half force the Rams playing without it for over five minutes, and soon after senior Colton Iverson broke the hoop on a dunk, stopping the game for 15 minutes in order to replace it.

Iverson has been breaking opposing teams’ wills along with baskets this season, recording his ninth double-double with 11 points and 13 rebounds.

CSU returns home this week to play Boise State Wednesday, and an important game against rival Wyoming on Saturday.