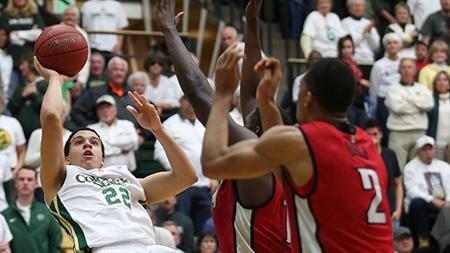 Colorado State guard Dorian Green, 22, shoots a fade away jump shot in the second half of Saturday nights win against UNLV at Moby Arena. Green led the Rams with with 24 points, 5 rebounds and 5 assists.

In a game that took all that they had, the CSU men’s basketball team came out victorious for its twenty-fourth consecutive home victory, but it wasn’t easy.

The Rams were paced by a complete performance by senior guard Dorian Green, who tallied 24 points while adding five rebounds and five assists in pushing the Rams’ Mountain West Conference record to 2-1 on the young season.

“I was just trying to be aggressive, I got a couple open looks early off a couple good screens by my teammates, finding me the ball,” Green said.

“I just wanted to be aggressive early and try to give us our best chance to win and I think when I play a lot better and I’m aggressive I think it makes our team better.”

Green’s efforts did make the Rams better, particularly on the offensive end as the Rams’ leading scorer on the season, center Colton Iverson shot just 1-for-8 while tallying just seven points.

One area of the game Iverson did make a contribution in was the rebounding category. The 6-foot-10 center chipped in 10 rebounds to go along with Pierce Hornung and Greg Smith’s six boards apiece as the Rams once again won the battle on the boards while out-rebounding the Rebels 36-34.

“We kept (UNLV) off the boards just enough to win,” CSU coach Larry Eustachy said. “I said, ‘whoever wins the rebounding is gonna win this game,’ and it was 36-34.”

While winning in rebounding margin against the Rebels, the Rams were able to take offensive touches away from UNLV while making scoring difficult on  their conference rival.

“We were just having a hard time getting any post touches,” UNLV coach Dave Rice said. “Colorado State is extremely physical in the post and we were having a hard time catching the ball on the block. That’ll be something we’ll have to address the next time we play them.”

The Rams managed to do many of the small things right against the Rebels, outperforming UNLV in turnovers, rebounds, fouls, three-point field goal percentage and free throw percentage in the game.

One reason CSU was able to win those battles was because it took one of UNLV’s key contributors, freshman forward Anthony Bennett out of most of the game.

Bennett entered the game Saturday night leading the Rebels in points per game (19) and rebounds per game (8.9). Against the Rams, Bennett was held largely in check while scoring nine points and grabbing six rebounds.

“He’s a great player, we put numerous guys on him and we did a great job,” Eustachy said. “He’s put up monster numbers – he had nine offensive rebounds  – he had nine against Air Force and he had one tonight. So I thought we kept him off the boards.”

Next, the Rams will travel to conference-leading New Mexico (16-2, 3-0 MWC) for another MW tilt Wednesday night in what could be a battle for first place in the conference.