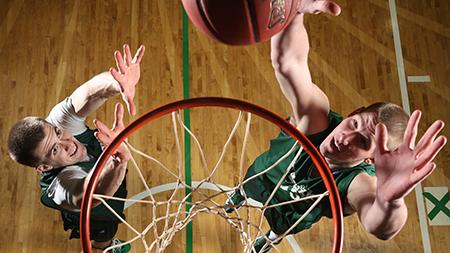 CSU's leading rebounders Pierce Hornung (left) and Colton Iverson (right) have helped the Rams become one of the top rebounding teams in Division I basketball. Hornung averages 9.9 boards per game and Iverson brings down 9.3, ranking first and third in the Mountain West.

Throughout the the first 19 games of a season with lofty expectations, one area that the CSU men’s basketball team has not disappointed in this season is their efforts on the boards.

Last year, the Rams pulled down 31.3 rebounds per game, which ranked them 300th in the NCAA.

This year, with the addition of 6-foot-10 transfer Colton Iverson, CSU has averaged 42.6 rebounds per game, good enough to put the Rams as the No. 4 team in the nation in that category and first in the Mountain West.

“Not to mention what he does on the defensive end, how he affects so many shots and grabs tons of rebounds, so I can’t speak enough to how much Colton means to this team.”

While the addition of players like Iverson (9.3 rebounds per game) and transfer Daniel Bejarano (6.1 rebounds per game) have helped the Rams, a major contributing factor to CSU’s success on the boards has been a team-wide effort led by coach Larry Eustachy to do the little things right.

“Eustachy, he teaches toughness every day,” Iverson said. “We won’t stop doing that the rest of the season and we’ll get it into the game.”

The Rams have gotten their rebounding into games this year while out-rebounding every team they have faced this season.

When CSU lost in overtime to San Diego State Jan. 12, the Rams were faced with the task of defending the second-leading rebounder in the conference, Jamaal Franklin.

The Rams held Franklin to seven rebounds, lower than his season average of 9.6 while not allowing him to grab any offensive rebounds.

“If you work hard, that negates height,” Hornung said. “I don’t even think about it, I look at the guy just as a guy going against me, I don’t look at stature or height or anything like that.”

Keeping Kirk off the boards was key Wednesday in the Rams’ comeback from a 20-point second half deficit which the Rams cut down to just three at the end of the game.

Despite coming just short in Albuquerque, the Rams can look back at their second half performance positively and look to incorporate what they did well in the second half while trying to duplicate that performance for a full 40 minutes in games the rest of the season.

“We have to build on parts of last game,” Eustachy said. “It’s clear to them — it’s the smartest team I’ve ever had — it’s clear to them that when we play this way we win, when we don’t we lose so it’s that clear.”

Continuing their dominance on the glass will be key to the Rams finishing their final 12 conference games strong as the parody-filled MW will likely be up for grabs by the end of the season.

“Rebounding and defense is our main focus in practice every day in practice,” Iverson said. “And if we can keep getting that on the court, especially rebounding, I think we’ll have a good chance of finishing this conference (season) pretty strong.”