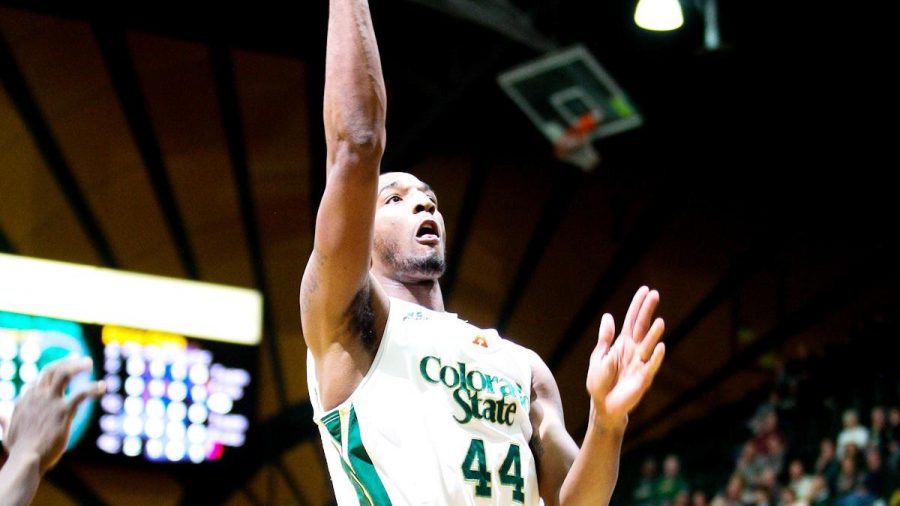 Greg Smith (44) goes up for a big lay-up to keep the Rams in the lead against Boise State on Wednesday night in Moby Arena. The Rams crushed Boise State by 25 points to defend their at-home winning streak.

Some nights you’re just feeling it.

Basketball is a funny game that way.

Wednesday night was just such a game for senior forward Pierce Hornung, who led the charge in a win over Boise State (14-6, 2-4 MW), 77-57, helping the Rams stretch their home winning streak to 25 games.

Hornung, known for his unparallelled hustle and grit, and most certainly not for his jump shot, did it all. He hit three 3-pointers (on three attempts), brought it 13 rebounds and tallied a game high 23 points, one off his career high.

“I just made one (three), it felt good, so I figured I try another and then tried another,” Hornung said. “It felt good. I felt like I was in a rhythm out there. My teammates Dorian (Green) and Colton (Iverson) found me for some easy baskets.”

Really the only area to critique Hornung’s play was at the charity stripe, where he was just 4-of-9, and he was the first to point it out. True insight to his mentality.

“He’s just a man,” CSU coach Larry Eustachy said of Hornung. “He’s not played well the last couple games … but nobody’s harder on Pierce than Pierce. The way to coach Pierce is to just keep his confidence up.”

The Rams seized control thanks to their defensive effort. They held Boise State, the Mountain West’s highest scoring team, to 38 percent shooting, nine percent under its season average, and almost 20 points below its scoring average.

“I think it was coming down to contesting and making every shot tough,” senior guard Dorian Green said of Boise’s poor shooting night. “If you don’t let those guys get in rhythm early then it kind of affects them.”

Neither team started off particularly hot from the field, but the Rams were able to stick with their plan and continue the type of quality defense they’ve shown most of this season.

Boise State went a stretch of nearly eight minutes to end the first half without a field goal, and were limited to 20 points at the break. The Broncos were hurt by the loss of their leading scorer Derrick Marks, who played just nine minutes because of an illness he couldn’t play through.

“We showed up for the game, and at shootaround today, we had one more guy and our leading scorer,” Boise State coach Leon Rice said. “And then when we get to the arena and Derrick can’t go out and warm up. … He tried, bless his heart. These guys are trying to compete, but sometimes they’re just curveballs thrown at you.”

Eustachy was impressed with the way his team battled through a sub-par shooting night, suggesting it was the best game they played all year.

“I thought we played our best for long periods of time in the areas that win: defending and rebounding,” Eustachy said. “I think this team has a huge upside for the next month.”

If the Rams are peaking, they picked the right time. Rival Wyoming comes to Moby Saturday for a pivotal game in the MW standings.