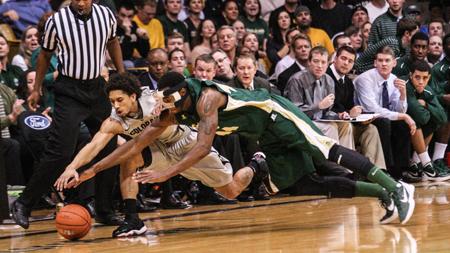 Colorado State forward Greg Smith (44) lunges for a loose ball against Colorado guard Askia Booker (0) during the first half of Wednesday nights game in Boulder.

After going up 20 points at halftime, it appeared CU-Boulder would run away with an easy victory over rival CSU Wednesday night. In the end, CSU made a big run cutting the Buffs’ lead down to one possession, but CU managed to hang on for a 70-61 victory.

In front of a Coors Event Center record 11,708 screaming fans, the Buffs did what they had to in order to pull out their biggest victory of the young season.

The Rams’ offense struggled to get off the ground in the first half, scoring just 22 points while shooting 30 percent from the field.

“It’s just embarrassing the way we came out,” senior guard Dorian Green said. “They punked us, I mean, they were more physical, more aggressive and they had us on our heels.”

The second half gave the Rams hope, however, thanks to timely shooting from Green, who tallied 18 points, and tough defense allowing CSU to get back into the game.

The Rams had a total of 14 turnovers in the game, a season high against a Buffs team that simply outworked their opponent.

“And I told my team after the game, I apologized to them and told them ‘I have not gotten you tough enough to get your game and take it from Fort Collins in here to Boulder.”

While the Rams’ offense sputtered, the Buffs’ offense showed periods of dominance and managed to continuously answer the bell when they had to while running a fast-tempo offense led by point guard Spencer Dinwiddie.

Dinwiddie, who fired a shot at CSU over the week calling the Rams CU’s “little brother” backed up his words by torching the Rams’ defense to the tune of 29 points.

The issues CSU had Wednesday night brings up painful memories for the Rams from last season, as the they went an impressive 14-1 at home in 2011-12, but posted a mere 3-9 record on the road.

The game against CU provided the Rams with a their first difficult road test of the young season and the result was more of the same struggles from last year.

“We didn’t handle it well again tonight Eustachy said of his team’s road performance. “To duplicate this in practice, you can’t. So we need games like this.”

CSU will now go on its longest road trip of the season so far when it travels to University of Illinois-Chicago, who the Rams will play Saturday afternoon at 2 p.m. MT.