Rams get past Evansville for sixth straight victory 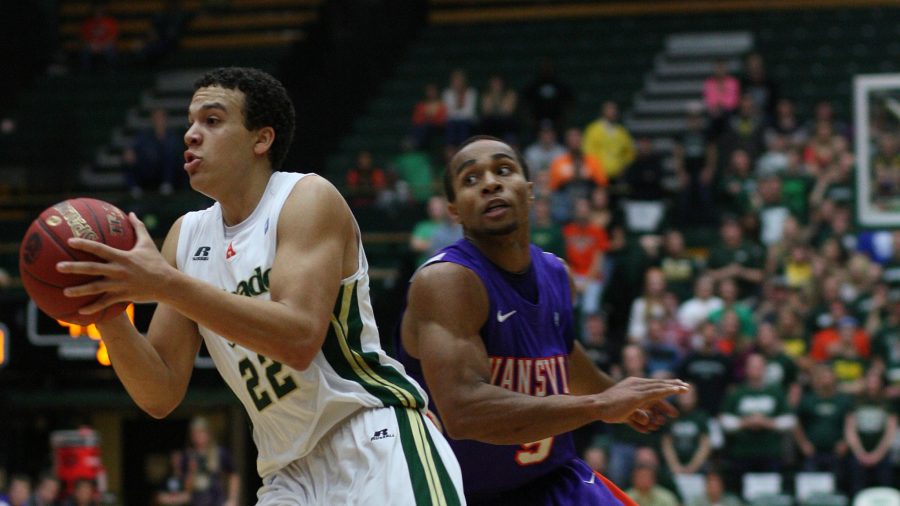 The CSU basketball team spoke all week of how a well-coached Evansville team will challenge the Rams in their quest for six consecutive victories.

On Saturday, Evansville gave the Rams all they could handle, especially late in the game, but CSU managed to hold on for a 79-72 victory.

The Rams came out to a fast start and looked to be in control throughout the game, managing to get off to a 7-0 run to start the game and maintaining a lead of at least six points throughout 19 of 20 minutes in the second half.

“We just tried to come out with energy,” senior center Colton Iverson said. “Slow starts were something we needed to focus on and I thought we came out with a lot of energy from the get-go, it was great.”

The steady play for the Rams faltered a bit toward the end of the game, when Evansville mounted a 10-3 run during the final five minutes of the game which brought the Purple Aces to within four points of the Rams with 20 seconds remaining in the game.

Evansville’s run was spearheaded by the shooting of freshman guard DJ Balentine, who scored six of the teams’ final 10 points en route to a game-high 26 points.

“It was a great game, once you think it’s over, they are right back in it,” CSU coach Larry Eustachy said. “How about their freshman Balentine? We knew he was that good, but we didn’t know he was that good.”

CSU managed to hold on to the lead late when Greg Smith converted a three-point play off a late layup to give the Rams a seven-point lead that sealed the victory for the Rams.

Though Evansville mounted the late run, the Rams were able to contain Evansville’s hot shooters most of the game by not allowing them to get second chances on shot attempts.

CSU out-rebounded Evansville 41-22 in the game as the Rams have out-rebounded every opponent they have played so far. Even without leading rebounder Pierce Hornung, the Rams received help from Iverson’s 12 rebounds and Smith’s eight.

Smith also led the Rams in scoring with 19 points on Saturday, tying a career high while marking the third game in a row he has scored in double digits for CSU.

“My teammates did a great job putting me in great positions to make plays,” Smith said. “(Iverson) was a passing wizard tonight, you just play hard and good things will happen.”

Iverson was forced to become more of a passer late in the game as Evansville tried to take the 6-foot-10 senior out of the game in the second half by running double teams at him while trying to help freshman forward Egidjius Mockevicius, who was getting into foul trouble while guarding Iverson.

“He was just really aggressive,” Evansville coach Marty Simmons said of Mockevicius’ effort. “He just gives us a lot of energy. He wants to be out there, and we know it’s important to him.”

Despite the Mockevicius’ efforts, Iverson notched his fourth consecutive double-double of the year in the game, while continuing his early-season momentum heading into the showdown at No. 19 CU-Boulder on Wednesday.