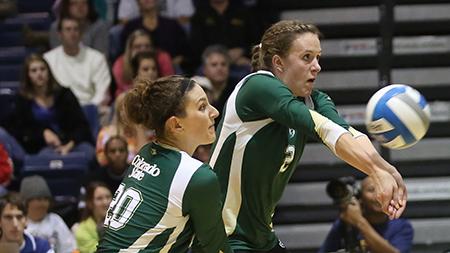 2012 will be remembered as a year of growth and overcoming adversity for the CSU volleyball team.

CSU finished the year 21-8 after losing to Purdue in the first round of the NCAA tournament, which was the Rams’ first loss in the tournament’s opening round since 2006.

The Rams struggled early on the road and in conference, but rallied at the end to win their fourth consecutive Mountain West championship and clinch the program’s 18th straight NCAA tournament berth.

It was the fourth consecutive conference title for seniors Dana Cranston, Izzy Gaulia, Breion Paige and Megan Plourde, who ended their careers with a .793 winning percentage and a Sweet 16 trip in 2009.

The Rams struggled with allowing extended point runs in those matches due to mental lapses and bad rotations, but gained a greater focus and calm in matches that allowed them to overcome those issues.

“Putting ourselves in that situation where the rest of the year was an uphill climb forced us to improve,” Cranston said. “I think that helped us continue to get better throughout the whole year whereas in previous years we’d plateau or let slip.”

Freshmen Dri Culbert and Jaime Colaizzi helped stabilize the lineup with their maturity and high volleyball IQs. Colaizzi started every game during the season while Culbert entered the starting lineup during the tournament in WIchita.

“I expected Jaime to make a contribution right off the bat, we really needed that spot. Dri was kind of a surprise, she allowed us to be more functional as a team because she could do so many different things well,” Hilbert said.

The Rams faced heavy resistance from San Diego State all year for the conference championship, as the Aztecs finished the year with an identical 13-3 conference record.

CSU needed to win its last eight matches in order to claim the championship, which it clinched on senior night with a 3-1 win against Fresno State.

It was a different experience for the Rams, who in the last few years built an early lead and clinched the title in advance of the final game.

“We didn’t win every game easily and we lost to people that we shouldn’t have,” senior middle blocker Breion Paige said. “It shows you all of the things that we’ve overcome.”

That’s what Hilbert will remember from the 2012 season — not the 3-0 sweep to Purdue at the end, but the development of his team and what it meant for his seniors.

“It was a great journey for those four kids. They’re great players, they’re great people and they’re good friends of mine,” Hilbert said. “That’s what I’m going to remember the most is what it was like for those four, because they were the signature of this year.”