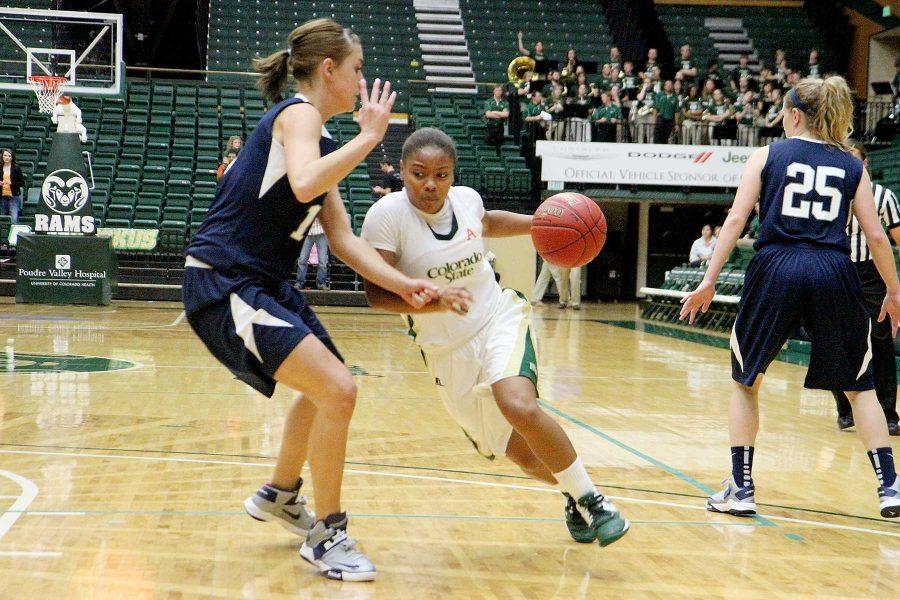 LeDeyah Forte (1) drives hard against the Mines on Thursday night.

CSU hosted the Colorado School of Mines for an exhibition match at Moby Arena Thursday night that ended with a 61-48 victory for the Rams.

The Orediggers knocked down the first two baskets to take an early lead before freshman guard Taylor Varsho became the first Ram on the scoreboard this season by sinking a three-point shot from behind the arch.

“I had my feet set on the first shot,” Varsho said. “It was a good feeling to finally get to the next level of Division I ball. It was just there and it went perfect.”

Both teams struggled with dusting off the cobwebs in the season opener as they each put up field goal percentages below 20 in the first 12 minutes of play.

“Obviously there was quite a bit of rust, I thought,” Williams said. “I didn’t know what to expect to be honest. I thought we were a little timid and cautious early on and let them dictate what we did offensively and that shouldn’t have been the case.”

Midway through the first half, something began to click for the Rams as they went on a 10-0 run to pull away from the School of Mines, which made only one basket in a 15 minute stretch.

“We began meshing together better and got out all the jitters, then we were all good,” sophomore guard LaDeyah Forte said.

The game’s momentum continued to be in favor of CSU all the way into halftime as junior guard Sam Martin hit two consecutive three-point shots to end the half with a 27-15 lead.

“I know I kind of needed it because I was going a little cold there,” Martin said. “It’s always good to end the half on a good note.”

The Orediggers finally found their groove going into the second half, but so did CSU.

“I think we had two good runs in each half that triggered the offense, and we have to play like that more consistently,” Williams said. “We can’t play comfortably like we did early on.”

CSU outscored the School of Mines by only one point in the second half, but their first half cushion proved to be enough for the Rams to walk away with the victory.

CSU plays Montana State next at home on Sunday, which also opened its season with an exhibition win.

“We had a little rough start, but it was our first game with this new coach and a bold new era,” Martin said. “That’s what you do. We got the jitters out, and know when we play Montana State we’ll be ready and good to go.”