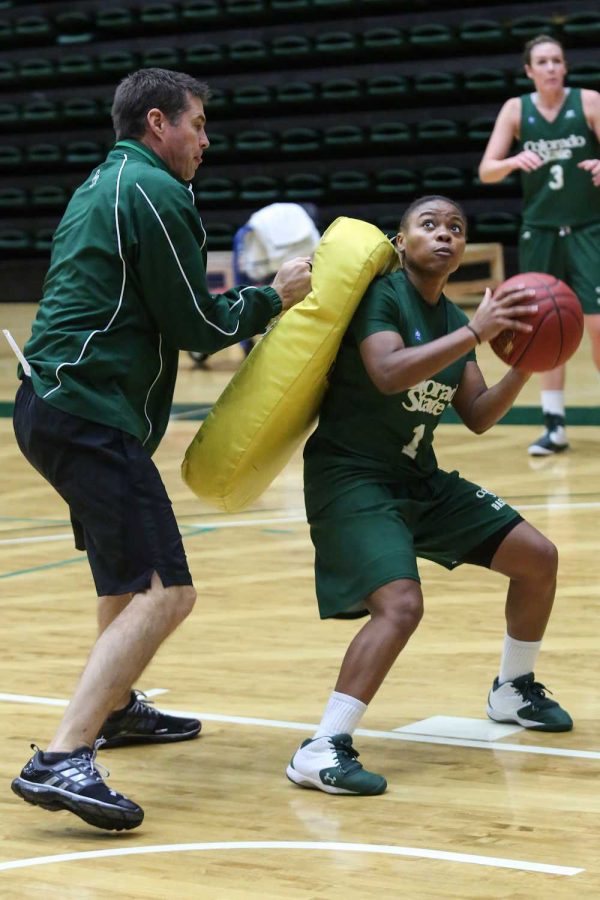 Guard LeDeyah Forte (1) fights through pressure from head coach Ryun Williams during practice Monday afternoon. The Rams are looking for their first win of the season tonight at Moby arena against UNC.

If there were any question if the CSU women’s basketball team is still hung up on its season opening loss over the weekend, the answer would be no.

The Rams fell short in their debut with new head coach Ryun Williams to Montana State on Sunday, but Tuesday night’s game against the University of Northern Colorado has Williams’ eye on the next one.

“We’re going to address it here with film and practice, but onward has to be our mentality,” he said. “You can’t change the last game, but you can change the things within that last game.”

However, Williams won’t have much time to turn those aspects about his team’s performance around before getting tested again. The Rams will run on only one practice between Sunday’s loss and Tuesday night’s showdown in Moby.

“There’s only so much you can do in a day, unfortunately,” Williams said. “They’ll battle us. They will be a physical, blue-collar type of team, so we have to be ready for that.”

The Bears travel to Fort Collins with impressive numbers from their season debut against Air Force, the same type of numbers that gave the Rams a rough stretch over the weekend.

UNC grabbed 45 boards and shot almost 50 percent from the field against the Falcons on their home court in Greeley last Friday, but CSU senior forward Meghan Heimstra likes her team’s chances in their home gym.

“We lost to them at their place last year in a pretty close battle that we should have pulled off,” Heimstra said. “So that will have us looking for our first win on the Moby court.”

Heimstra, who is typically one of CSU’s breakout performers, had an unusually rough welcome back with a performance that fell well below her previous averages. This is something she is already looking forward to fixing; with a specific plan in mind.

“For a first game, I think we had lots of ups as a team, but also things that need to be worked on,” Heimstra said. “I need to get more rebounds. I’d like to get at least 10. I’m going to focus on getting more steals, and helping out my team on defense.”

UNC won its exhibition game and season opener, and Williams acknowledges the fact that UNC’s momentum will play a factor in Tuesday’s game.

“We do need to worry about Northern Colorado. We need to contain their strengths,” Williams said.  “But right now it’s more about Colorado State, and fixing what we can control.”

The Rams and Bears tipoff at 7 p.m. at Moby Arena.