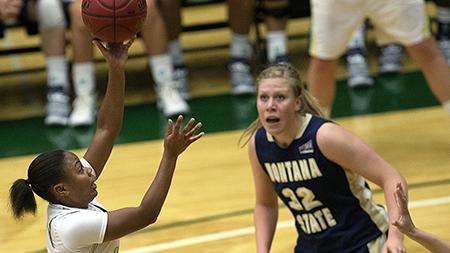 Sophmore guard LaDeyah Forte,1 drives to the basket Sunday afternoon during there season opener against visiting Montana State at Moby Arena. The Rams lost the game 58-53.

It seemed as though the CSU women’s basketball team was writing themselves a comeback story in their season opener, but the story wasn’t quite long enough.

The Rams fell in their first game 58-53 to Montana State at home Sunday. The debut that caught Moby’s attention wasn’t that of new coach Ryun Williams or his team, but the new face on the roster.

Surprisingly enough, the Rams were led by a freshman, Taylor Varsho, who had 19 points in her double-double varsity debut. “You can ask anybody who was in the stands who played hardest, and it’s Taylor Varsho, which is a positive thing. The bad part of that is that she’s a freshman,” coach Ryun Williams said. “That motor is a winning motor and we need more of it.”

Varsho was the first Ram on the scoreboard this season when she knocked down her three-point shot to draw the first blood in Sunday’s game. She had eight of the first 12 points for the Rams, but unfortunately for the newcomer and her team, this is the spot the Rams got stuck.

“I think we needed two good halves and that didn’t happen,” Varsho said. “You’re going to have nights when shots aren’t falling and we’ll have to find another way to win.”

After jumping out to an early lead, CSU went ice cold. It let Montana State go on a 21-0 run midway through the first half that included being scoreless for over 10 minutes.

“We weren’t getting stops on defense and we weren’t scoring on offense. It was really discouraging,” junior guard Sam Martin said. “We were turning it over a lot and it showed.”

Although the Bobcats topped the Rams with 21 turnovers, CSU lost Sunday’s game on the defensive side of the ball. The Rams allowed Montana State to grab 50 rebounds in the game, 21 offensive.

“It’s hard to play defense for thirty seconds then another and another when we continue to give them the shot clock back,” Martin said. “I know that it will be a big part of tomorrow’s practice.”

CSU went into halftime down 31-18, but whatever Williams said to his team in the locker room must have been exactly what they needed to hear.

The Rams opened up the second half with a 9-0 run to put them back into a game that seemed to have no place for them. They even took the lead back once again late in the game, but defensive struggles had CSU leave the court with the loss.

“We did win the second half. It just wasn’t enough to get the W,” Varsho said.