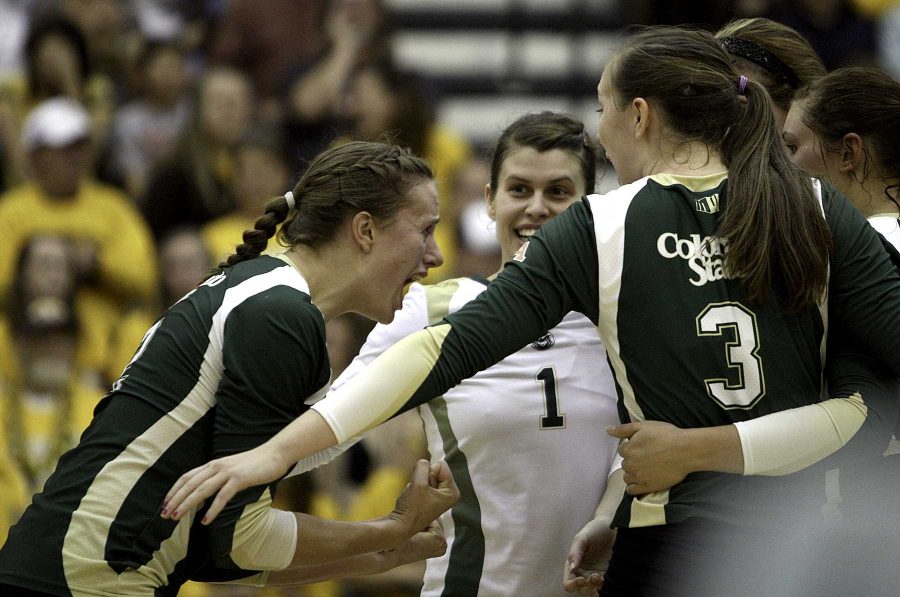 Dana Cranston celebrates after scoring a point during the first game of Saturdays sweep against the Wyoming Cowgirls. The rams swept all three games at the Uni Wyo Sports Complex in front of a sold out Wyoming crowd.

Even in a UniWyo Sports Complex filled with screaming Cowgirls fans, the ball sounded like it was shot from a cannon after Dana Cranston got through with it.

She finished with a game-high 17 kills, leading CSU to a 3-0 win against Wyoming Friday night in Laramie.

“She was a warrior from the beginning of the match and even through some rough patches. She still stayed in there and continued to play smart,” CSU coach Tom Hilbert said.

Wyoming came out swinging early, no doubt powered by the sell-out crowd of 1,003 in a very confined arena.

The noise wasn’t so much distracting for the Rams as it was invigorating and motivational for CSU.

“I said to the girls in the huddle, ‘how awesome is it that people are at the game?’ First of all for the sport in general, and to play in front of a crowd, that’s so cool,” Cranston said.

The Cowgirls fed off the energy early, taking a lead in the beginning of every set, but CSU showed its composure and responded with a point run to take control.

Cranston started to struggle early in the third set after Wyoming changed their blocking scheme to start to key on her.

She blasted four kills in the third set and took some of the heat away from Cranston.

“For me, these are the types of environments I thrive in because it’s a go get ‘em,” Thomas said.

CSU’s block didn’t connect early, only stuffing two balls in the first set, but it improved as the match went on and the Rams finished with eight for the match.

That caused Wyoming’s hitting percentage to settle at .124, but Cowgirls’ coach Carrie Yerty couldn’t find many things her team did wrong.

“CSU came and played great volleyball, and you know what so did we. They played a little bit better,” she said. “The end outcome isn’t exactly what Wyoming would like, but I’ll take that competitive, never give up, never die Wyoming attitude any day. That was a great match.”

The win kept CSU in a tie for second place in the Mountain West after San Diego State’s win Thursday against UNLV.

The Rams still control their own destiny in the conference due to their upcoming match against UNLV, and the fact that they hold the tiebreaker against SDSU.

“Every time you have an experience it teaches you something about yourself, and this was a great experience for us,” Hilbert said. “This will help us understand how to play in tough situations and not give up and not get rattled.”