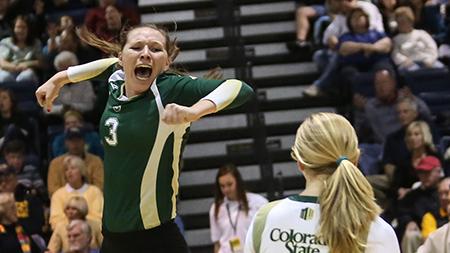 Colorado State Volleyball faces off against University of Northern Colorado in Greeley, Colo. Tuesday evening. The Rams defeated the Bears three games to one.

Tom Hilbert isn’t big on recognizing milestones, but he  keeps on reaching major ones after picking up his 400th win at CSU.

CSU defeated Northern Colorado 3-1 in Greeley Tuesday night, winning on the road for the first time in non-conference play.

“My feeling is it should be recognized when we’re done because as we do it along the way I’m thinking about completely other things,” Hilbert said. “I feel like I’m not paying the type of respect to it that maybe it deserves, and I’d rather it be done at the end of the season or at the end of my career or when I’m dead.”

And No. 400 certainly didn’t come easily, CSU trailed in every set during the match, and rallied for a 28-26 win in the third set after facing set point at 26-25.

“We’re learning how to be a good endgame team as a collective group, which is going to catapult us at the end of the season,” senior outside hitter Dana Cranston said. “It shows how clutch everybody is, and I think it’s cool that it wasn’t just one person.”

The Rams leaned on their senior leaders all night and they delivered when the match hung in the balance.

Dana Cranston, Breion Paige and Megan Plourde blasted 16, 14 and 10 kills to power CSU out of a 1-0 hole to three consecutive set wins to take the match.

“One of our main focuses was to establish the middles early to take some pressure off of our outsides,” redshirt sophomore setter Deedra Foss said.

Cranston had four kills in the first set, but just as many errors. CSU jumped out to an early 8-4 lead only to watch UNC claw back in it and win the set 25-21 behind four team blocks, which held CSU to a .139 hitting percentage in the set.

“It was a product of us not attacking the ball aggressively, and the set location was bad,” Hilbert said. “But the other thing is Kelley Arnold is good. You can’t go right at her and we did that too much.”

Arnold, a senior outside hitter, finished with two solo blocks and a match-high 24 kills.

The Rams rallied to win three consecutive sets after dropping the first for the second consecutive match, and did so without the services of their senior libero Izzy Gaulia, who missed the match with muscle spasms in her neck.

Hilbert’s primary goal for the rest of the week is keeping his team fresh because they still need to play at Air Force on Thursday and at Boise State on Saturday.

“We’re going to have to take it really easy Wednesday because there was a lot of volleyball played here tonight,” Hilbert said. “It is what it is. We’ve got to get ready for Boise and Air Force and do it in a way where we don’t stress our players out physically.”