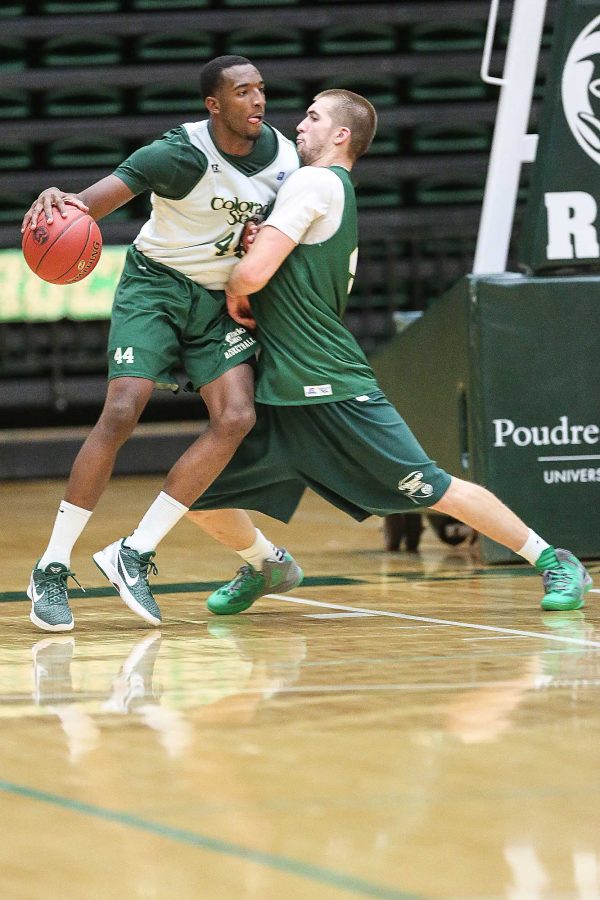 Greg Smith, 44, attempts to push past Pierce Hornung, 4, during practice. The Rams will be looking for their second straight home win against Chadron State tomorrow night at Moby Arena.

The Rams, however, will likely be without the services of senior guard Dorian Green, who suffered from concussion-like symptoms.

Green did not participate in practice this week after reporting blurry vision to the team’s medical staff. His absence will open the door for players like sophomore Jonathan Octeus, freshman Jordan Mason and sophomore Daniel Bejarano to play a bigger role.

“The young guys need to step up and just pick up the slack,” Bejarano said. “When one goes down, someone comes up, and that’s the best thing because we have depth this year.”

That depth was on display last week against Montana, when the Rams shot just 37.7 percent from the field in the first half but managed to pull out the win by dominating the glass, out rebounding the Grizzlies 44-21 in the game.

“That’s what good teams do,” senior forward Pierce Hornung said. “You can’t rely on the jump shot or your inside game; you’ve gotta be able to come out and do the things that you can do every night like defend and rebound and play tough basketball.”

The Rams have the ability to do those things this year thanks in large part to a dynamic lineup, which has size and speed allowing for the flexibility to run out both big and small lineups on the court.

Going into a game against the versatility of the Rams’ roster poses a daunting task for opposing coaches.

That task becomes an even harder for a team like Chadron State, which is coming off a 21-point loss to Division II Nebraska-Kearney on Monday.

With the disparity between the two teams, tonight’s game amounts to a tune-up game for both sides.

The game gives Chadron State the ability to see how they match up against an NCAA Tournament team from last year, while the Rams will try to work out the kinks of playing under first-year coach Larry Eustachy, and becoming accustomed to seven players who are playing in their first year of eligibility as Rams.

“The more we practice together, the more we play games, the more we’ll understand each others’ roles and their strengths and weaknesses,” Hornung said. “Overall chemistry will build amongst us. It definitely hurts that Dorian is not out there, but it’s a chance for some guys to step up and really do some things out there.”