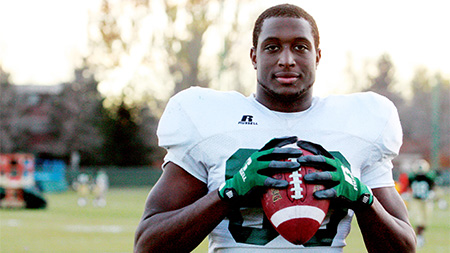 CSU tight end Kivon Cartwright found his place on the team in 2012, becoming one of the Rams' top receiving threats.

CSU tight end Kivon Cartwright is not what you would expect in a typical Division-I college football player.

The 6-foot-4, 235 pound redshirt sophomore is soft-spoken and humble to a fault. He’s more Peyton Manning than Ray Lewis. But when game day comes around, Cartwright can be a menace on the football field, due in large part to his relentless work ethic.

The effort Cartwright displays doesn’t go unnoticed by his teammates as well.

“He’s a hard worker, that’s the biggest thing,” CSU quarterback Garrett Grayson said. “Coach Mac says all the time, ‘do the right thing,’ so when we’re in the weight room or in film-study, whatever, he’s never skipping out on things. He’s a guy that’s just reliable and you can always count on him.”

That work ethic was on display from the first day of fall camp during Cartwright’s freshman year when he helped fellow tight end Crockett Gillmore get accustomed to playing in a new offense.

“Day one of camp, I hadn’t been around, I was in class and he had already known all the plays and stuff so he did a great job of helping me out,” Gillmore said.

The relationship with Gillmore has extended throughout Cartwright’s time at CSU, as the two room together on the road and spend hours every day together helping each other learn how to play the tight end position.

“Me and Crockett are good friends,” Cartwright said. “We’re roommates on the road and everything and we came in here in the same class, so we try to help each other out because we both realize how much talent the other person has.”

Many Rams have spoken glowingly about the character and personality that Cartwright brings to the team, but the Rams’ third-leading receiver this year almost did not play football in college at all.

Cartwright had dreams of playing college basketball during his time as a three-sport athlete at Pueblo South High School, but realized he would probably not become tall enough to play in the Division-I ranks.

“During my time coaching at South High School, he was probably one of the kids that I had that I felt was a Division-I football player,” Haering said. “(His) sophomore year, that was one thing that I told him, I know he really enjoyed basketball, but I saw he had the athletic ability.”

Now the Rams have the ability to take advantage of Cartwright’s versatile skill-set on offense.

Cartwright has played at fullback, halfback and has even lined up as an edge blocker on field goal attempts. His dynamic ability is something that bodes well for the future success of the CSU offense.

“You look at a lot of the real successful offenses, and one of the things is to have… the versatility of tight ends that can play multiple positions,” McElwain said. “And that’s something we’re gonna be able to do here and in the future.”