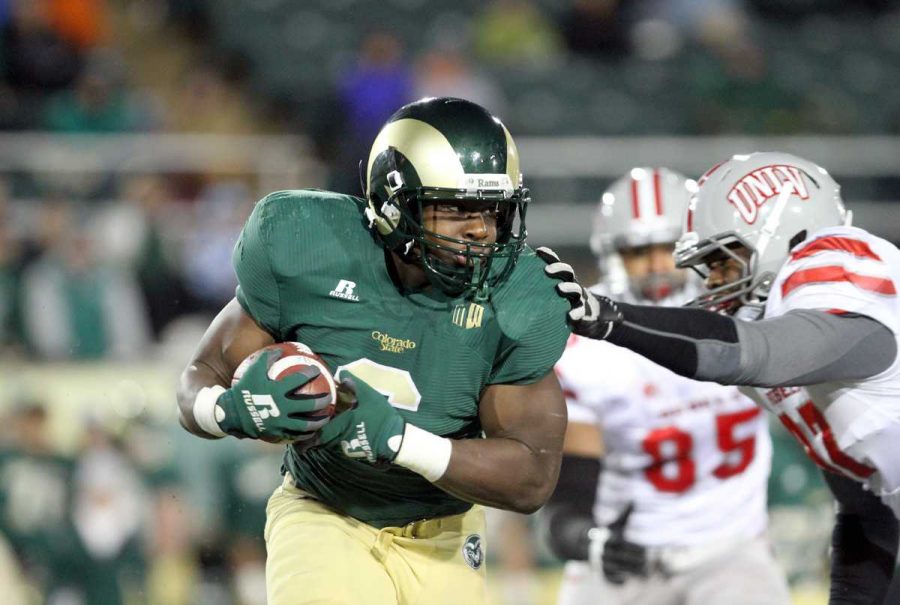 Throughout the season, CSU has struggled to get off to a good start early on in games, that wasn’t the case Saturday night against UNLV.

The Rams used their defense to ignite their offense, causing four turnovers and scoring two defensive touchdowns en route to a 33-11 victory over the Rebels.

“Obviously it helps when you get some defensive touchdowns,” CSU coach Jim McElwain said.

“I can’t say enough of those guys how they came back. … I thought they really did a heck of a job, got off the field, gave us a chance, gave us some short fields and I’m really proud of the way that they came out and performed in the game.”

The dominating defensive effort started at the end of the first quarter, when UNLV quarterback Nick Sherry’s pass was intercepted by linebacker Shaquil Barrett, who returned the pass 49 yards for a CSU touchdown.

On the very next pass he threw, Sherry was intercepted, this time by Max Morgan at the UNLV 40 yard line, but the Rams failed to capitalize and ended up punting the ball back to the Rebels.

Early on in the second quarter, the Rams’ defense again came up big when Shaq Bell returned a Bradley Randle fumble 30 yards for another defensive score to give CSU a 14-0 lead over the Rebels.

“I was running to the ball, seeing (Calvin) Tonga hit him and I was just seeing the ball and just picked it up and just tried to get the touchdown,” said Bell, who also recorded five tackles in the game. “It felt awesome.”

The final touchdown of the first half came off a 10-yard Donnell Alexander rush which was set up by a Sherry fumble that CSU managed to recover at the UNLV 16 yard line.

“We gave them three touchdowns in the first half,” UNLV coach Bobby Hauck said. “You can’t gift wrap a game like that against a conference opponent. It’s an evenly matched game and they took it.”

The Rams added a 49-yard field goal by Jared Roberts, the longest of his career, with two seconds left in the first half to take a commanding 24-0 lead over the Rebels going into halftime.

The second half proved to be much of the same for the Rams as they controlled the clock having a time of possession of 19:16 in the second half compared with UNLV’s 10:44, and kept the Rebel offense at bay.

CSU running back Donnell Alexander rushed for 72  of his 139 yards in the second half and scored his touchdown with the Rams leading the game 27-8 which extended the Rams lead to 33-8 and sealed the much-needed victory for the Rams.

The game marks the second consecutive week that Alexander, a freshman, has managed to rush for over 100 yards.

“It’s definitely something I would like to build on,” Alexander said. “Just keep getting better, try to finish the season strong, so it’s something I look forward to do.”

The win for the Rams is their second straight victory at home after beating Hawai’i at Hughes Stadium two weeks ago and moves their record to 3-7 overall and 2-4 in Mountain West Conference games.

The loss for UNLV drops its record to 2-9 overall and 2-4 in the conference.

CSU will now travel to Boise State to face a Broncos team that was just dropped from the top-25.

For more in-depth coverage of tonight’s game, be sure to check out Monday’s Collegian.

Football Beat Reporter Andrew Schaller can be reached at sports@collegian.