CSU football has little left to play for except each other 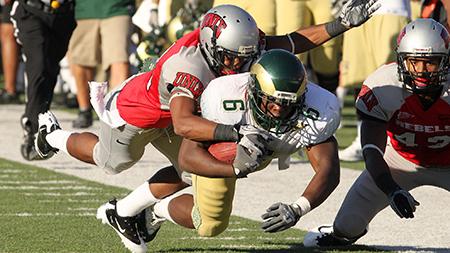 Runningback Chris Nwoke (6) is brought down after a 38 yard rush that gave the Rams a first down in the second quarter against UNLV in Las Vegas, NV last year. This weekend the Rams will face UNLV again at Hughes Stadium at 5p.m.

Both UNLV and CSU’s season’s in total have been similar, but the latest taste left in each program’s mouth couldn’t be different.

With all hopes of making a bowl game for the first time since the 2008 New Mexico Bowl officially dead, the Rams are left to play for pride and each other.

“For one, you’re building momentum to carry over to the offseason, to help us through next year and the summer program,” tight end Kivon Cartwright said. “But also to send the seniors off right because these are the guys who’ve been here for four or five years, putting in all the work and stuff, and I really don’t wanna see them go out like the seniors did last year.”

UNLV presents the Rams with the first of three final opportunities, two of which are at home, to send their seniors out as winners. The Rebels, like CSU, are a team trying to rebuild a program from the ground up.

“You never know from the outside looking in, and when we walked in here we knew it would be a long term proposition,” UNLV coach Bobby Hauck said during his weekly MW coaches teleconference. “And if that’s the case you just gotta put your head down and go to work.”

The biggest improvement is the success of the running game led by a four-legged attack from Tim Cornett and Bradley Randle. The two have combined for 15 touchdowns and helped UNLV place fifth in the conference is rushing yards per game with 164.5.

“They definitely like to run the ball, so I mean, in the years past that I’ve played them, they’ve been kind of a run-gun (offense),” senior linebacker James Skelton said. “They had a real athletic quarterback in the past. And this year it pretty much, just pro-style offense. A lot of shifting, a lot of tight end trade and stuff, so they just wanna get downhill and they’ve got some really good running backs.”

CSU coach Jim McElwain, who’s been searching for consistency himself, is impressed from what he’s seen from initial film study.

“I can see just from summer study to now, from a personnel standpoint, Bobby’s  getting the type of players that I really think you need,” McElwain said. “They show good speed on defense with some real size up front and obviously that’s a concern for us.”

The Rams will stick with Connor Smith at quarterback, despite the season’s initial starter Garrett Grayson being available. The hopes of departing seniors leaving CSU as winners now rest on the shoulders of a redshirt freshman.

“He’s been doing well for a really young guy. He’s been really doing a great job,” running back Chris Nwoke said. “You know, obviously he makes mistakes, but he holds his head up high and he’s able to keep leading the team and doing the right things, so we have faith in him.”