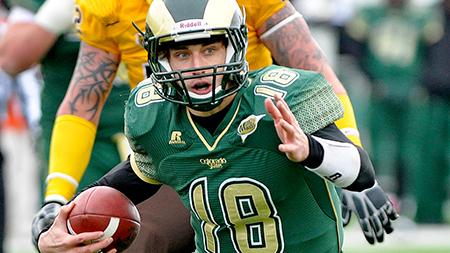 Freshman quarterback Garrett Grayson, 18, rushes toward the end zone during the Border War between CSU and Wyoming at Hughes Stadium Saturday. The Rams lost their final eight games of the season to finish 3-9 for the third year in a row.

CSU’s first win over hated rival CU-Boulder proved to be a cautionary tale of how quickly a team can rise, but more importantly how far they can fall.

The sweet sensation faded almost instantly and got replaced by the bitter taste of a six game losing streak. After a dominating performance at home against Hawaii last week, the Rams look back at that first week as a gruesome reminder.

“We can’t get too high on ourselves. I feel like after that CU win, we felt like the season was over, we didn’t have to play no more,” sophomore wide receiver Charles Lovett said. “We can’t do that. You saw what happened when we got like that, we went on a losing streak, a long losing streak.”

For the past three years, the Cowboys have claimed the Boot, and in a season where wins have been scarce, keeping it is all that matters.

“We’re kind of forgetting about the record right now, and if on Sunday night we can be 1-0, I think that will do a lot for the team,” Wyoming’s senior linebacker Korey Jones said. “Twenty years down the road from now, 30 years down the road, seeing as if we win this game on Saturday then (the seniors) never lost to CSU in their careers. They’ll remember that for the rest of their lives.”

This will be the first time CSU coach Jim McElwain’s ever been a part of the oldest rivalry west of the Mississippi.

“There’s something electric about rivalries, and I’m looking forward to experiencing it,” McElwain said. “This is why you go and you play college football. It’s things like this that make it special and I’m excited to see how our guys respond. I know how much it means to them up there and I’m excited to see what our guys have in store.”

Wyoming’s defense should provide the Rams with opportunities to continue the success they found against Hawai’i, ranking 97th or worse in every defensive category.

“We need to find a way to string together (wins) somehow, and in Wyoming, we feel like we’ve got the perfect opportunity because they’re a struggling team like us,” junior linebacker Shaquil Barrett said. “The Boot belongs here, and we know it’s important to them and it’s important to us, so we want to let them down and bring it home with us.”

Leading the Rams in search of the Boot and their second straight win will be redshirt freshman Connor Smith, despite the return of quarterback Garrett Grayson, who began the season as the Rams’ starter before breaking his left collarbone against Air Force on Sept. 29.

“I think he’s had a really good week and he’s still (learning)…but I think situationally he’s starting to get a much better grasp,” McElwain said. “I don’t think Connor’s done anything to (lose the job). It’s his opportunity and he’s done a good job with it, so therefore he should be able to go.”