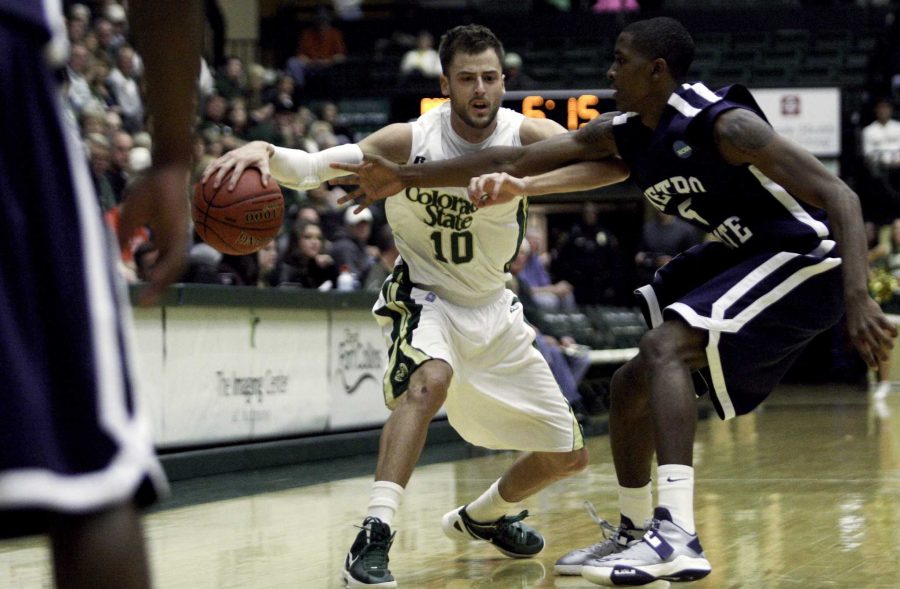 CSU guard Wes Eikmeier drives to the basket during the first half of an exhibition game against Metro State at Moby Arena Sunday. The Rams won easily 87-67 in a tune up for the season opener on Nov. 9 against Montana.

The more things change, the more they stay the same for CSU men’s basketball.

In a 87-67 victory over Metro State in their opening exhibition game on Sunday, seniors Pierce Hornung and Greg Smith picked up right where they left off last season, each adding double-doubles for CSU.

But new players also shined, like transfer guards Daniel Bejarano and Jon Octeus, who took turns running the offense while combining for 19 points and 12 rebounds in 31 minutes of playing time.

Highly-touted transfer Colton Iverson, who gives the Rams more size at 6-foot-10, struggled in his first game at CSU, grabbing seven rebounds, but turning the ball over four times in 23 minutes of action.

“I just think he was a little nervous,” CSU coach Larry Eustachy said. “And we are going to limit his game with the dribbles. He will be really effective before (the preseason is) over.”

The Rams worked six players who were not on the team last year into the exhibition in hopes of getting them accustomed to playing with the older players on the team.

“That’s why these exhibitions are so good, everyone kind of figures out their roles,” Hornung said. “And you get chemistry amongst the team, and it’s a good chance to improve on that.”

One of the Rams that may have to adjust to a new role this season is junior guard Dwight Smith, who factored prominently in the Rams’ run to the NCAA Tournament last season.

Smith only played in the last three minutes of the exhibition Sunday, a move Eustachy said is meant to send a message to Smith to perform better in practice in order to compete with the new talent.

“I had guys in there that were new, so I’ve got a lot of confidence in them,” Eustachy said. “I think Dwight has got the message that he’s gotta work harder or he’s gonna bury himself.”

The Rams rotated in eleven men in the exhibition game, but Eustachy said after the game that he will run an eight or nine-man rotation when the season starts, leaving little margin of error for players like Octeus and Dwight Smith who are competing for a limited amount of minutes.

The players that do get out onto the floor for the Rams during the regular season will have to learn Eustachy’s offense quickly, as the Rams have said they have only installed one play so far this offseason.

A remedy for the lack of structure in the offense could be getting out in transition, something the Rams excelled at during their exhibition, scoring 26 total points off fast break points and points off turnovers.

“Coach has expressed that he wants us to run and we have the depth and capability of doing so,” senior guard Wes Eikmeier said. “So we’re gonna take advantage of missed shots and the players that we have and get up and down the floor. So he’ll get us in the right position to win the game.”