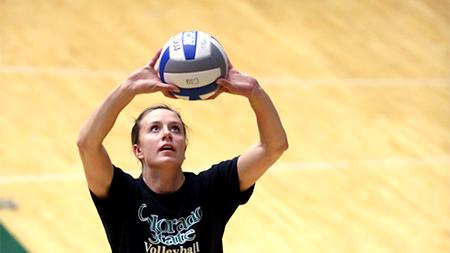 The top five teams in the Mountain West volleyball standings are separated by only one game entering the second half of the conference season.

CSU will begin part two of conference play Thursday against San Diego State at 8 p.m. on Aztec Court. Free online streaming of the match will be available through goaztecs.cstv.com.

Denser air at sea level makes the balls heavier and float less, which allows for more aggressive attacks and serves, but complicates passing compared to playing at altitude.

CSU struggled receiving serves in Wichita, Kan. during a non-conference tournament earlier in the season, and lost many of those games due to allowing long point runs.

“You can’t simulate it here, you just have to get in their gym and practice,” CSU coach Tom Hilbert said. “It takes you a little bit of time to get used to it, and once you do you’ll be fine.”

Beyond dealing with a change in environment, the Rams will also have to contend with a balanced SDSU attack that features four players averaging more than two kills per set.

Outisde hitters Summer Nash, Michelle Waber and Raegan Shelton tend to receive most of the attention, but middle blocker Andrea Hannasch has been named the Mountain West Player of the Week twice in 2012.

“They have a threat in every position and good hitters all across the board,” CSU senior Dana Cranston said. “It’s challenging for us as blockers.”

The Rams plan to handle that potent attack by prioritizing the attackers that pose the largest threats and then hoping the complementary players don’t end up beating them.

Though CSU has only picked up one win away from Moby Arena, the team has fixed many of its focus issues that plagued it on the road earlier in the year.

“We have better connections, better tempo. I feel like our team is more in control of their game,” Hilbert said.