CSU football gets blown out against San Diego State 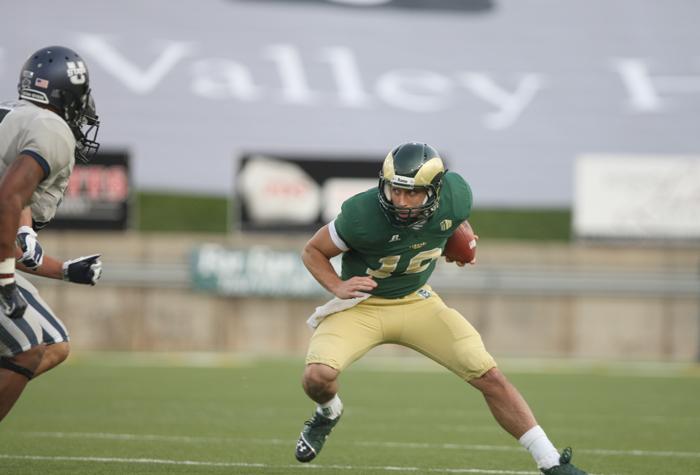 The Colorado State University Rams take on the Utah State Aggies on Saturday an Huges Stadium.

What started out as a close contest in the first half quickly turned into a blowout as CSU football lost its sixth straight game to San Diego State Saturday 38-14.

The elation from the productivity of the Rams offense, however, turned out to be short-lived.

The San Diego State offense scored touchdowns on three of its first four drives in the second half, and suddenly, a very manageable 17-7 deficit the Rams faced at halftime ballooned into a 38-7 Aztecs lead after three quarters.

“Today we just couldn’t get it done,” wide receiver Marquise Law said. “We had long drives and then turned the ball over. It’s definitely frustrating as an offense.”

The high scoring total in the game for the Aztecs was largely due to the success San Diego State had on the ground against the Rams.

“(We) missed tackles and some of us got glued to blocks and couldn’t get off,” linebacker Shaquil Barrett said. “We saw (they were good) on film, and they showed it today. We need to get better at tackling and getting off blocks.”

Offensively, CSU could not keep up with the Aztecs’ offense while failing to get running back Chris Nwoke going on the ground again, as Nwoke had 59 yards rushing and averaged only three yards per carry in the game.

Through the air, the Rams started to find a rhythm under the leadership of red shirt freshman Conner Smith, who came into the game in the second quarter after starter MJ McPeek went down with a left shoulder injury.

Smith completed his first 10 passes in the game, mostly for short yardage, but threw a costly interception on the CSU 26 with 10:03 remaining in the third quarter. It was the third consecutive drive the Rams turned the ball over and as it would turn out, set up the second touchdown drive for San Diego State off those turnovers.

“For the first time out there, he obviously did some good things,” CSU coach Jim McElwain said of Smith. “(But) you have to take care of the ball. You have to throw it to your guys with your colored jersey. I don’t care how many passes he completed in a row.”

The large deficit proved to be too much for CSU to come back from, as the Rams have now lost five of their last six games and 14 of their last 15 games overall dating back to last season.

The victory for the Aztecs moves their record to 4-3 overall, and 2-1 in the Mountain West Conference, as San Diego State stays in the middle of the pack in the race for the conference title.

CSU will have a bye week next week before returning home to play Hawaii on Oct. 27 at 5 p.m. MT.

For more in-depth coverage of tonight’s game, be sure to check out Monday’s Collegian

Football Beat Reporter Andrew Schaller can be reached at sports@collegian.com